The Wright brothers, were next door neighbors with Frank Lockhart 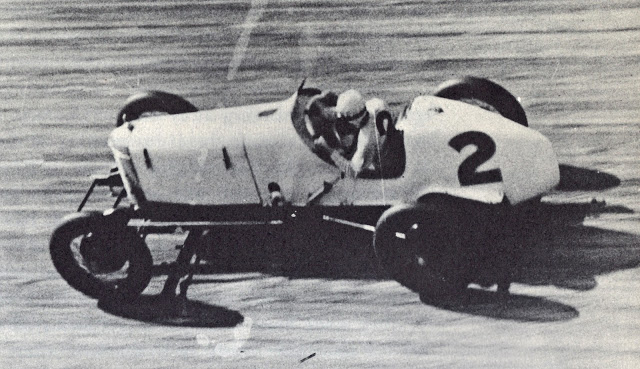 Lockhart doing an 147.7 mph lap on the Atlantic City board track

two enemy historians and Lockhartphiles, Griffith Borgeson and Mark L. Dees, used to exhaust themselves arguing about who knew the most about Frank Lockhart.

One thing they agreed upon was that he was born on April 3, 1908, in Ohio, probably in Dayton, where the family’s next-door neighbor was alleged to be the father of the Wright brothers of Kittyhawk fame.

Wright Sr. was said to be a fire-and brimstone evangelical preacher; additionally he was an inventor with his own modest garage laboratory and was young Frank’s introduction to science.

In comparison to Campbell’s four-ton Bluebird, Lockhart’s own LSR contender, the Stutz Black Hawk, was a toy, weighing less than 3000 pounds and able to fit within the wheelbase of Bluebird.

Its construction process had been complex. Lockhart first grafted together two Miller straight-eights to create a blown 16; then he visited the Duesenberg works and carried off some of its best talent; finally, he hit up the struggling Stutz Motor Company for sponsorship cash.

By early 1928, his streamliner was ready to confront Campbell on the beaches of Florida. Campbell turned a critical eye on the Black Hawk and tut-tutted that she was so lightweight she might sail out of control; and sail she ultimately did, on two occasions. The second, on April 25, 1928, was the end of Lockhart.

Lockhart’s powerful legacy continued exerting itself. Sold by his widow at a 1928 estate sale, his matching pair of custom-built Millers remained so technically advanced that they succeeded in dominating the Indy 500 and the U.S. national championship for the next two years. And, of course, his Atlantic City numbers stood fast through the next 33.