the first nuclear thrust beam engine, the Tory-IIA, made under Project Pluto, a United States government program to develop nuclear-powered ramjet engines for use in cruise missiles. 1961 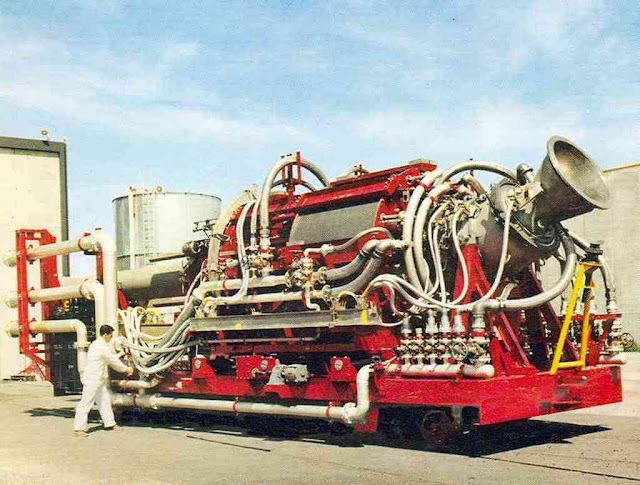 The engine above is still in R and D, but the finished ram jet engine would have powered a locomotive-size missile that would travel at near-treetop level at three times the speed of sound, tossing out hydrogen bombs as it roared overhead. Pluto’s designers calculated that its shock wave alone might kill people on the ground. Then there was the problem of fallout. In addition to gamma and neutron radiation from the unshielded reactor, Pluto’s nuclear ramjet would spew fission fragments out in its exhaust as it flew by.

On May 14, 1961, the world's first nuclear ramjet engine, "Tory-IIA", mounted on a railroad car, roared to life for a few seconds.

Despite these and other successful tests, the Pentagon, sponsor of the "Pluto project", had second thoughts. The weapon was considered "too provocative", and it was believed that it would compel the Soviets to construct a similar device, against which there was no known defense.

Intercontinental ballistic missile technology had proven to be more easily developed than previously thought, reducing the need for such highly capable cruise missiles. On July 1, 1964, seven years and six months after it was started, "Project Pluto" was canceled.