Buster Keaton spent 1942 and 43 in the US Army's 1st Evacuation Regiment, of the California State Guard, coincidentally, Keaton had been in the Army in WW1 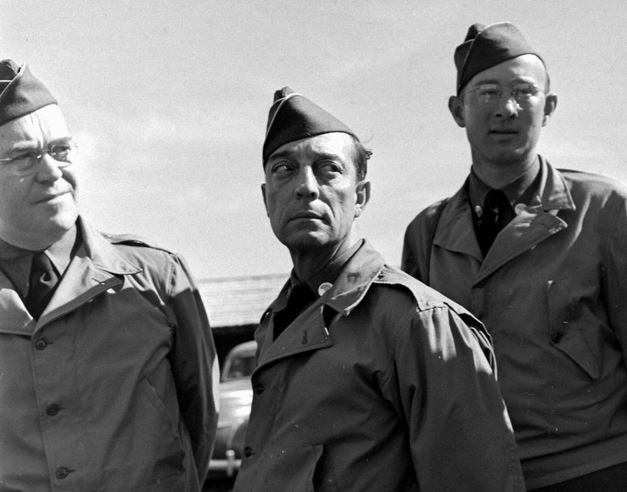 Buster had just started in the film business at the age of 18, when he was called into service with the infantry, but somewhere along the way, was switched over to the Signal Corps for training at Camp Kearney, near San Diego. Army life was tough on Buster.

In his autobiography My Wonderful World of Slapstick, Keaton said, "I resented my uniform, which made me look and feel ridiculous. Apparently, the quartermaster general had never anticipated that anyone under five foot five inches tall would be allowed to join the United States Army.

My pants were too long, my coast looked like a sack, and wrapping Army puttees around my legs was a trick I never mastered. The size eight shoes handed me were far too big for my size 6 1/2 feet. Old-timers in our outfit had long given up hope of ever getting uniforms that fit them. They had theirs altered at civilian tailor shops.

They also bought sturdy workmen’s shoes, which they managed to disguise well enough to pass inspection." But Buster, like most GI’s, found ways around "the system," even in 1917. His rich and fashionable girlfriend, who he meet a couple of months earlier while he was a budding film star, lived near Camp Upton, New York, where his battalion was staging to debark to France. He observed how the officers, who were allowed to come and go in and out of camp, dressed in just their uniform shirts and ties and saluted the sentries.

Buster took off his tunic, hopped with his girlfriend into the into the back of her chauffeured Packard roadster, and drove past the military police, giving that lazy salute that had them convinced he was like any other officer.

He returned that night after a fabulous dinner with his girl and the next day the unit left for France. While most of the division’s units were broken up and the men scattered to various units, Keaton’s was the exception; staying together as a unit until it was sent back to the United States seven months later. The unit was held in reserve and Buster and his fellow soldiers never actually saw any action.

During the Second World War, Buster Keaton returned to the colors, again as a private, as a member of the 1st Evacuation Regiment of the California State Guard, known as the "Station Wagon Brigade", as they were formed in response to the fears that the anticipated Japanese invasion would require a massive evacuation of Southern California.

Sort of like the “taxicab army” of the First World War, it was planned to organize and use civilian station wagons to evacuate families and individuals without personal transportation. In February 1942, the regiment conducted a major training exercise when it convoyed from its home station to a movie set located in Calabasas. Also in that regiment was Rudie Vallee and Ceasar Romero (who went on to be the Joker in the Batman tv show, starred in the original Oceans 11 with the rat pack, and guest starred on a lot of famous tv shows https://www.imdb.com/name/nm0003110/)