innovate, adapt, overcome, and that was applied to this pair of 14" cannons that were taken off a battleship and used as rail guns, with names. Which was something else I'd never heard of, that they had been named 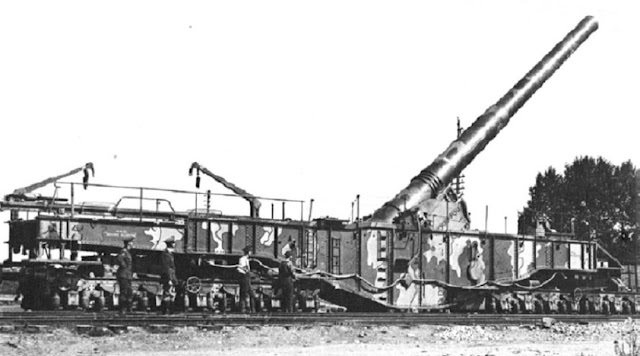 Unique to these 14 inch Railways Guns, was that the one, the HMG Scene-Shifter has a breech opening to the left, and the other, the HMG Boche-Buster, had the breech opened to the right.

The reason being that these two guns were originally made as a matched handed pair for a battleship's turret, where the requirement was for the gun's breeches to both open towards the outer edge of the turret, one to the left and one to the right.

During their brief 3 months of service on the Western Front, the two 14 inch BL Railways Guns fired a total of 235 rounds. However, after WW1, and as these two Railway Guns were not a standard calibre and no spare parts were available, neither of the guns were retained in service, they were declared obsolete in 1926 and were scrapped. Their railway mounts were retained, and in 1940 were returned back into service and reused as mounts for Railway Guns assigned to Home Front Defence.