A Chevy Bel Air that was used to transport Grateful Dead band members, crew and who ever from 1970s-1990 was up for auction in 2015, but didn't sell

The car was acquired by a Grateful Dead crew member in 1975 and then gifted to his step son (the runner for the Grateful Dead) in 2003.

“This 1956 Chevy Bel Air was given to me by a longtime crew member for The Grateful Dead (who owned this car for a number of years) five years ago. The car was customized in San Rafael, California by the same shop used by many Hell’s Angels for their bikes; it was repainted and re-chromed and the “Steal Your Face” logo was embroidered on the rear deck.

The crew member who gave this car to me told me that he drove Jerry Garcia and other band members around in it for decades and that they all had some great adventures in her.

This car has been a beloved part of the Grateful Dead Family for thirty-three years and it was used at some point as the inspiration for artwork on a Grateful Dead backstage pass. 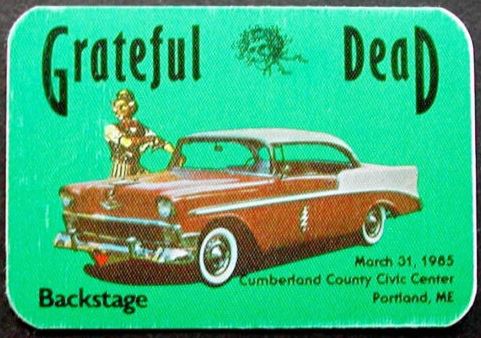