Does it look like a million dollars? Or just an investment where some buyer wagered a million that some one else in the future will pay more than a million to own it? 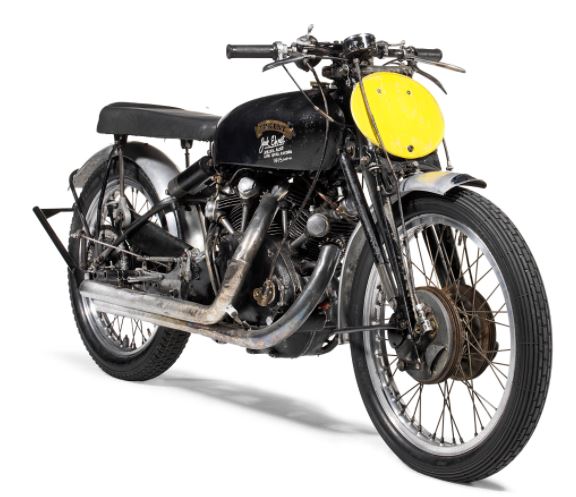 Vincent only made 30 Black Lightnings, of which this is perhaps the fastest, having clocked 141.5 mph in 1953

19 of the bikes built are believed to still exist. This three-owner bike has a glorious racing history.

It was built by Sydney rider Tony McAlpine, who became virtually unbeatable in Unlimited class events aboard the Black Lightning, winning 12 major races from 13 starts. While racing the 1951 Isle Of Man TT between races, McAlpine worked at the Vincent factory at Stevenage assembling this bike. He sold it to a racer, who crashed it, and sold it to Jack Ehret who owned a couple motorcycle shops. He worked on it and broke the Australian speed record for the sales promotion for his business. He raced it occasionally, storing it for a decade at a time.

This Vincent stayed in Jack Ehret’s hands for nearly half a century, and he finally sold it when he was 76 yrs old, and running nightclubs in the Philippines

The ultimate Vincent was the Series C Black Lightning, a special order production version of the bike Rollie Free rode to break the AMA’s land speed record in 1948 on the Bonneville Salt Flats.