Guy Martin spent 5 months building a working replica of a World War One tank, passed his tank driving test, just to drive the machine at Lincoln's Remembrance Day parade (origin town of the tank) and then police freaked out that a tank, 4mph, would be on the city street. 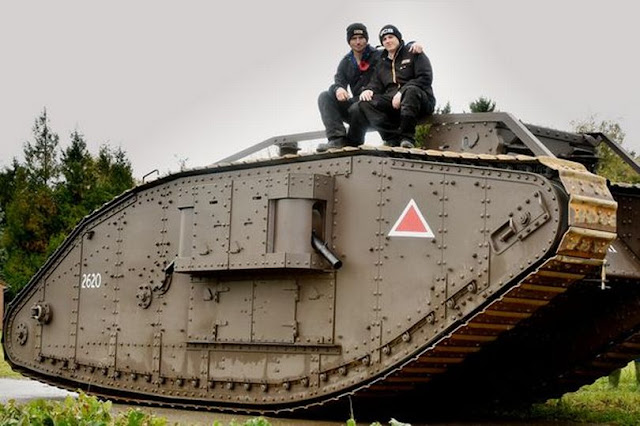 For Martin's tank, the team created a 3D computer-aided design based on photographs provided by German model ­expert Thorsten Brand – as well as using a Haynes Workshop Manual.

The steel chassis was welded together by a team at JCB’s factories in Staffordshire.

His five-month mission to build the 26ft long by 10ft wide replica from scratch was shown on the Channel 4 programme Guy Martin's WWI Tank on November 19.

However the plan to drive his WW1 tank through Lincoln city centre was scrapped because the police were "not happy".

The city of Lincoln has long been recognised as the home of the tank; the place where the armoured vehicle that transformed modern warfare was first developed. So it seemed fitting that there should have been plans for a replica of the Mark IV British tank to take part in the city’s Remembrance Day events.

But those plans have now been scrapped on health and safety grounds, after fears the tank might pose a danger to shoppers.

Lincoln City Council said it could not guarantee the safety of of shoppers and sightseers congregating in the area if the tank had joined the parade because of the size of the vehicle and its lack of maneuverability.

The police say the safety committee required extra safety and security measures, and I think it all sounds like a money issue was brought up where the local council required local businesses to profit from extra security people, traffic directors, parking attendants, trash removal, traffic barriers, etc etc from the extra amount of tourists that would be lured to Lincoln by the filming of a internationally televised event, and rare opportunity to see a WW1 tank roll through main street. The tv people declined to entertain that, instead, filming a similar piece in France.

Craig Bowness, from Welton, wrote on Facebook: "I’m just one of the many that are extremely disappointed, confused, disheartened in the horrendous decision not to give Lincoln and it’s fantastic war efforts a bit of limelight on this show that was primarily made to use Lincoln as its number one focal point.