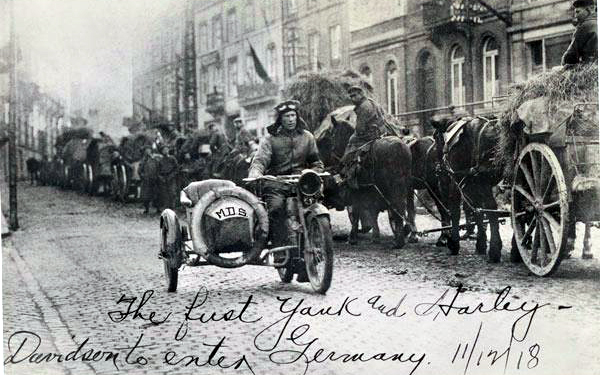 On November 8, 1918, Ray Holtz was stationed with his Unit in Northern Belgium, near Spa, close to the German border, and as a Despatch Rider, Holtz was ordered to take an American Captain on a night reconnoitering mission, the weather was bad and in the pouring rain they took a wrong turn and got lost. In the distance they could see the lights from a farmhouse, and decided to get direction from the farmer. Without knowing, they had actually crossed the German border, and the farmhouse was occupied by German officers of the 5th Bavarian Division, who were as surprised to see the Americans, as the Americans were to see the Germans.

Ray Holzt and his Captain were treated as guests of the German officers, and were then held prisoner for just 3 days, and as soon as the Armistice was announced on November 11, they were released by the Germans and their Harley Davidson motorcycle combination was returned to them.

Shortly after, Corporal Holzt and his Captain found their way back to their Unit, which had reported them missing. In the days following the Armistice, Corporal Holtz and his Unit crossed the border with Germany back and forth many times, and Ray Holtz thinks that is when the photograph was probably taken.

Corporal Holtz was unaware of the photograph, until it was shown to him by an American newspaper reporter in June 1943.