how does a 50s car take out a big ol airplane... must have been Ron Weasley flying his dads car again? How do you convince your insurance company it was the airplanes fault? 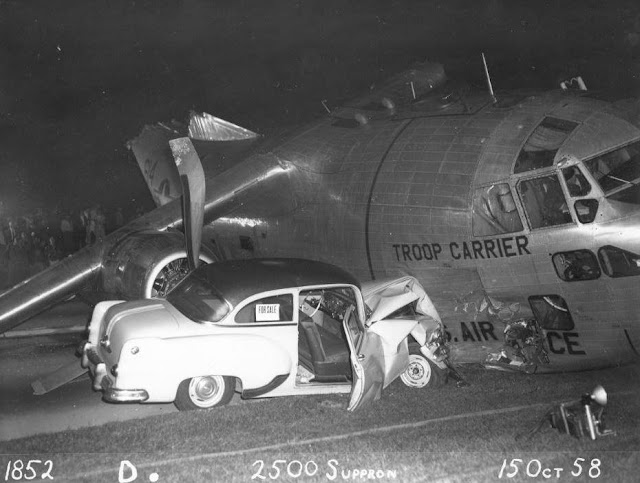 wel, they don't have to keep trying to sell the car now.

Steve learned the story behind this image:

A military transport plane with seven men aboard crash-landed on a busy highway Wednesday night, smashing into three cars during a wild skid and fatally injuring a motorist. The twin-engine C123 ran out of gas and swooped down on the four-lane Southern State Parkway on Long Island. Skidding hundreds of feet, it ripped through an underpass and struck three cars before stopping in flames.

The plane had been trying to land at Zahn's Airport, about half a mile from the crash scene. After hitting the highway the plane skidded several hundred feet and into an underpass. The plane has a wingspan of 119 feet; the underpass is 50 feet wide. The plane emerged with wings, tailpiece and one engine gone.