The idea behind torque vectoring is to spin the outside tire slightly faster through a corner to point the car into a turn.

While mechanical differential torque vectoring is awesome and results in physics-defying handling, it's still relegated mostly to pricey luxury cars.

That's changing, thanks to a simple formula tweak: Instead of speeding up the outside wheel, it now slows down the inside wheel. And that doesn't require anything fancier than brakes and software.

Voila! Torque vectoring is cheap enough to be included since 2013 in the Nissan Altima, where it's called Active Understeer Control. What once required genius mechanical engineering is now handled by a few lines of code.

For some reason, Ford, wasn't aware of, or deliberately deceives its advertisment readers, and claims Nissan Altimas don't have this. 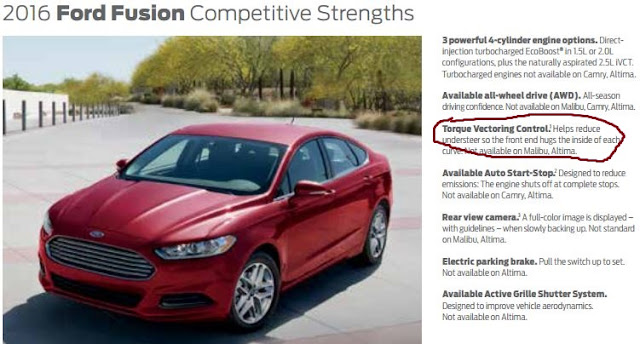