a Worthington in West Bend used as a yard tractor to move around a belly tanker among other things (thanks Darold!) 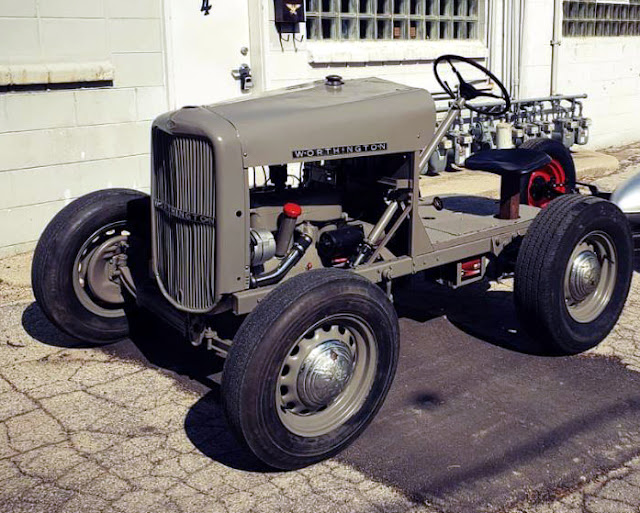 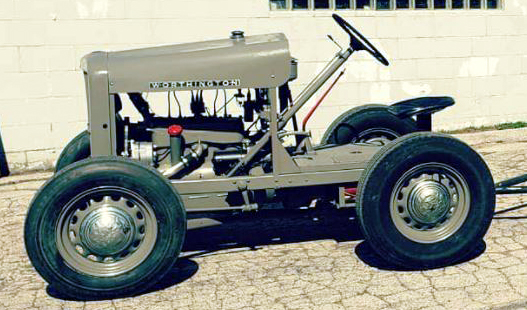 originally called the Shawnee Mower Factory, produced lawn mowers and light-duty tractors in the United States from the early 1920s until around 1959. Founded by Brooklyn born Charles C Worthington and run as a family business until he died in 1944, it was sold to the Jacobsen mower (Racine Wisconsin) company about 1953

Jake carried the line for many, many years under their name. They were primarily built to tow the ground driven reel mowers used on golf courses and other large tracts.

It uses the 8N industrial power unit consisting of the Ford engine, radiator, front support and hood and grille.

The front axle and steering gear are from a Ford 1/2 ton pickup while the 4 speed transmission and rear end are from a Ford 3/4 ton pickup. The frame is made from channel iron. The tractor has hydraulic brakes and a spring and shock type E-Z Ride seat.

The 2 most common options on the tractor itself were dual rear wheels and a PTO.

The most common attachment for the tractor was the gang mower, but a sickle bar mower, front snow blade, heavy duty loader, and rotary highway sweeper brush were also available. 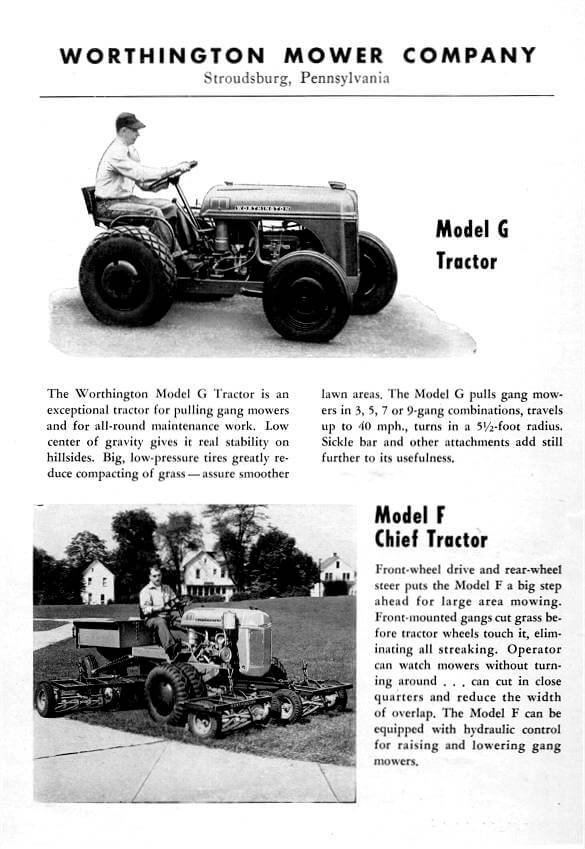 Charles Campbell Worthington (1854–1944) was a successful businessman whose father had invented the first direct-acting steam pump in 1840.

In the late 1890s he began to spend an increasing amount of time at his country home in Shawnee, on the Delaware river, in the Pennsylvania Poconos, west of New York.

He built his first small golf course around 1898 and in 1900 retired to live in the country.

Worthington remained an active mechanical engineer and founded the Worthington Automobile Company, which built several steam automobiles to his designs. 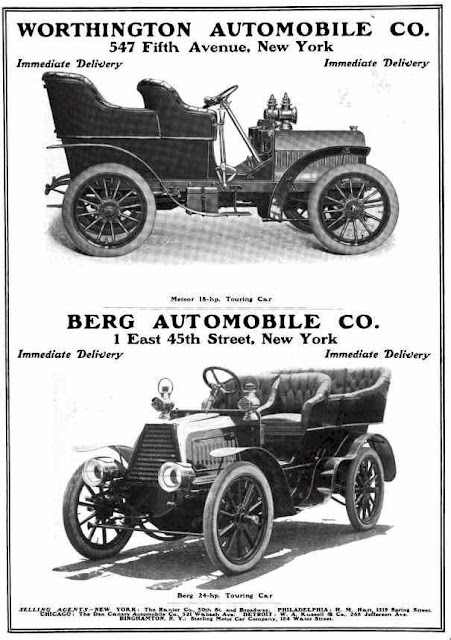 Worthington bought the Berg car co, http://www.earlyamericanautomobiles.com/americanautomobiles12.htm which had gotten started by having the Cleveland Machine Screw Company simply make an exact copy of a French Panhard car and was advertised as such, and was financed by the Vanderbilt fortune

Near Shawnee he built the Buckwood Inn on 8000 acres, an exclusive resort with an eighteen-hole golf course. This later became the Shawnee Country club. The course was completed around 1910.

In 1912 Worthington invited professional golfers to compete on his course, and this led to the foundation of the Professional Golfers' Association of America.

After trying unsuccessfully to keep the fairways in shape by grazing sheep on them, Worthington designed the gang mower with three moving wheels.

He launched the Shawnee Mower Factory to manufacture it, later this became the Worthington Mower Company, based in nearby Stroudsburg, Pennsylvania.

The first Worthington gang mower was three-wheeled, pulled by horses with their hooves covered in leather to prevent damage to the grass.

In 1919 Worthington designed and built a gasoline-powered tractor to pull the mowers.

The Worthington tractors were assembled using parts from the Model T

The company introduced the triplex Overgreen mower in 1928, powered by an engine made for them by the Indian Motocycle Company of Springfield, Massachusetts.

The next year they began using engines made specially for them by Harley Davidson, and in the late 1930s, Worthington produced the Model C using a Chrysler six-cylinder engine and transmission and axles from the Dodge pick-up.

In 1935 Worthington won a case against a competitor for infringing his patents after taking the case to appeal. The gang mowers were adopted by golf courses across the country.

In 1930 the company won a contract to supply mowers to the Air Corps for mowing airfields based on technical superiority, despite not being the lowest bid. After appeal, the contract was cancelled on the grounds that the specifications had been devised so that only Worthington could qualify.

Production continued during World War II, and the company earned 'E' and 'Star' awards from the Army-Navy.

As well as being used to maintain the grass on airfields, the tractors were used to pull airplanes and trailers carrying bombs.

sometimes I get lucky, and lear a lot of cool stuff.

I can tell you for certain, I got no idea where anything leads, and I do not even try to make a story from nothing, it just happens sometimes

Darold saw this post, and recalled that a neighbor with a small used car lot and junkyard uses this following Worthington to move cars around, and sent me these photos 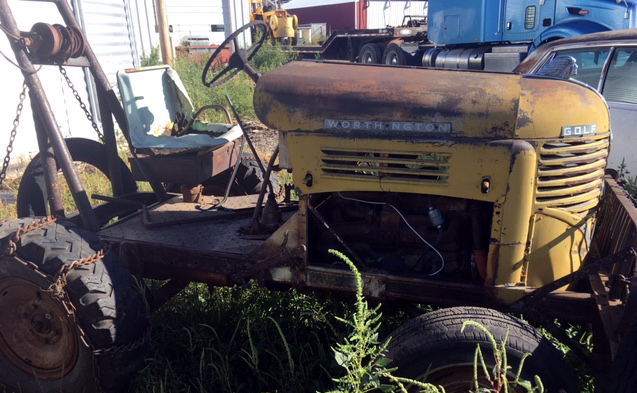 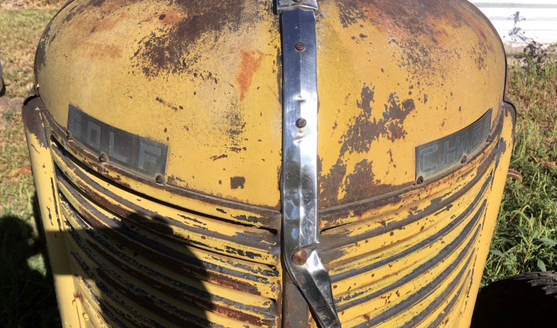 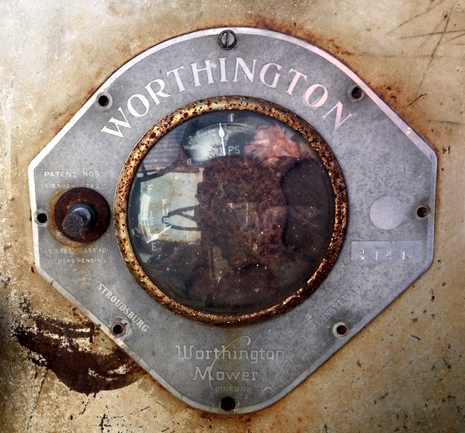 Wow, this is real cool! Now we can see the instrument cluster, and the big push bar with a couple tires across it, like wreckers had in the 60s and 70s, and that it's golf course intention was indicated by the words on the side of the radiator, and the junkyard even added a winch!
at Saturday, May 08, 2021