3 weeks of Army bootcamp, was all this New Jersey putz could take, before he scaled the fence and got the hell out, with an Army M4, and hijacked a school bus, with a load of kids, that pestered him with questions he couldn't take, so he made his grade school hostages get off the bus.. their questions were more than he could handle 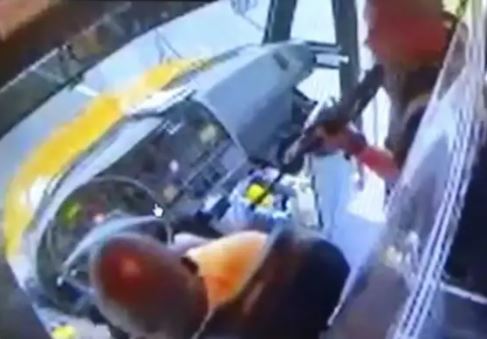 I don't know what kind of mama's boy this jackass is, but you can guess based on that he's a 23 year old punk from New Jersey joining the Army instead of 1) joining the Marines, 2) getting a job 3) escaping from bootcamp in 2021

The elementary school students on the bus were more than he could handle. "The kids started asking lots of questions to the suspect," Lott said. "The suspect got a little frustrated."

Lott said the trainee let the children and the driver off the bus then continued to drive for a couple more miles. He eventually left the rifle on the bus and went through neighborhoods attempting to get rides and clothes, Lott said.

I went through bootcamp in 1989, Navy. Sure, the Army has a bit different way, but seriously, in 2021, it's milk toast, and cream puffs.... you won't believe me unless you've got a relative that has been through recently, they spend about an hour a day just posting online how it's going, I shit you not. My nephew went through Army bootcamp last year, and I can assure you, not only is it coed, the DIs can't even make scary faces anymore. It's a lot more more like phys ed class than Full Metal Jacket.

Seriously, 18 th grade kids pestered this poser so bad he made them get off the bus so he could get some relief. This is a punk who thought he "deserved respect" for being

He has been charged with 19 counts of kidnapping and numerous additional charges of carjacking, possessing a weapon on school property, armed robbery and weapons possession during a violent crime.

This putz is now going to be in prison for at least a decade, Army prison, and he's going to be famous there, for threatening 18 kids with a rifle. I bet he'll regret not just gutting it out in the regular army for the rest of his miserable life