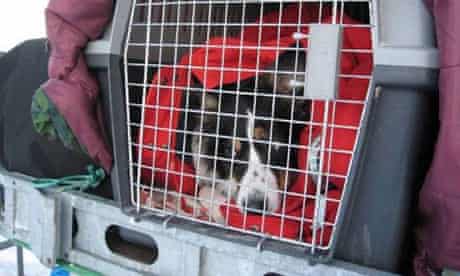 The dogs' ability to sniff out oil spills beneath snow and ice has been tested and paid for by Shell – and other oil companies and government research organisations – in preparation for the industry's entry into the forbidding Arctic terrain.

The company's oil spill response plan, approved by the interior department last month, calls for a fleet of vessels to be on standby at all times, as well as for the construction of a special capping system that would be able to capture and store up to 80,000 barrels of oil a day.

"Shell and others are looking mainly at technology like advanced radars [and] satellite to detect oil under ice," Smith wrote in an email.

The absence of canine participation is in no way the dogs' fault. The dogs – border collies Jippi and Blues, and dachshund Tara – were able to pick up the scent of oil up to 5km downwind of a spill, the researchers found.

They held up well to long flights, -40C temperatures, and bumpy snowmobile journeys. They were also able to focus on their mission – and did not go tearing off after polar bear or seals, the study said.