Why is it that we're a month away from Union Pacific's Big Boy 4014 getting out and rolling under it's own pressure, but the most recent update video is 2 months old? Do they realize they can record a video, and post it online, in 5 minutes, on the same day, in the same hour? 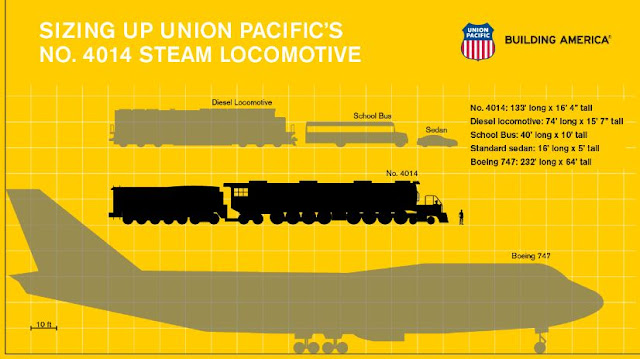 Union Pacific said Wednesday steam shop crews lit a fire in Big Boy 4-8-8-4 No. 4014 for the first time in 60 years on April 9. It was the first time the engine was fired up as an oil burner.

The May 9 ceremony will feature Union Pacific's iconic steam locomotives, Living Legend No. 844 and Big Boy No. 4014. The two will meet, recreating the historic image taken at Promontory Summit on May 10, 1869. The Big Boy is one of eight left in the world. It's newly refurbished and the only one in operation. Following the steam meet, Union Pacific Chairman, President and CEO Lance Fritz and Utah Gov. Gary Herbert will be joined by Margaret Yee and Sandy Dodge to tap a ceremonial spike. Yee's ancestors were among thousands of Chinese immigrants who forged the transcontinental railroad for Central Pacific. Dodge is a descendent of Gen. Grenville Dodge, Civil War veteran and Union Pacific's chief engineer during construction.

The steam locomotives will remain on display at Ogden Union Station until May 12, when they return home to the Steam Shop in Cheyenne, Wyoming.

No Big Boy locomotive has run under its own power since 1959, and its restoration is unprecedented in the annals of American steam locomotive preservation.