Did you see that video of the gymnast that landed wrong and dislocated both legs? She's going to be ok, nothing broken, and she's already got a job lined up due to her major in aerospace engineering degree, 3.48 gpa, and already has a job lined up at Boeing 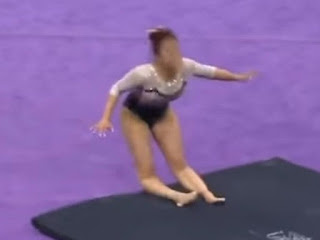 Though she was excellent at gymnastics, it wasn't her focus in college.

She's been in gymnastics since age 4, so, 18 of her 22 years. Seems unreal that he life has been dedicated to a sport with no future, but, that's life.

Gymnasts rarely can keep at it past their 20s, (except Oksana Chusovitina) the majority have to move onto something else, and are only at it until they achieve the Olympics, or such time that they realize they've peaked, and then move onto something else. So, though it's dominated he life so far, she was already transitioning to a career elsewhere.

Similarly, Olympic gold and silver medalists are doing other things, and though their childhood was traded for perfection in one discipline, they were also setting their life in the right direction for a life of distinction is any other goal they set for themselves. Even the Jamaican bobsled team

Bill's comment is SO savage, I have to feature it right here:
"Her landing technique should fit right in at Boeing."
at Tuesday, April 09, 2019