the New York, Chicago & St. Louis Railroad Company was probably the only railroad in the United States built for cash in advance of the issue of stocks and bonds, it became known as the Nickle Plate Road 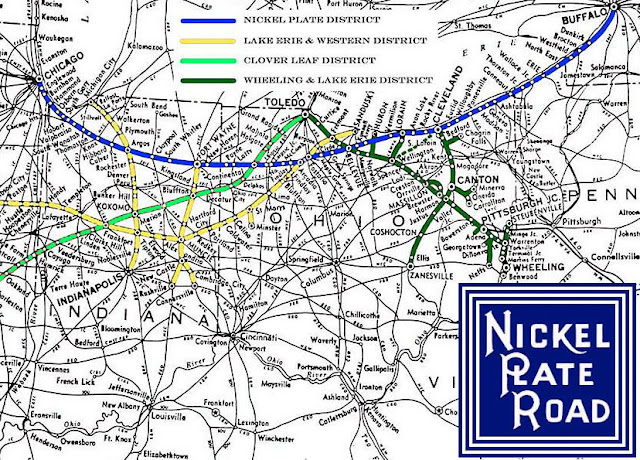 The 25 years after the American Civil War more than doubled the existing American railroad track miles, changing the face of America forever. American railroads allowed products made in the East to be shipped to the expanding West less expensively than previously. This allowed for an economy of scale - larger, more efficient factories. The agricultural heartland of America was no longer confined to a market of single day's trip by wagon. Railroad and railroad construction became one of the largest industries during that era. By 1881, one out of 32 people in the United States was either employed by a railroad or engaged in railroad construction.

Starting about 1877, two great railroad developers, William H. Vanderbilt and Jay Gould, began competing for the railroad traffic along the south shore of the Great Lakes. By 1878 Vanderbilt had a monopoly on rail traffic between Buffalo, New York; Cleveland, Ohio; Detroit, Michigan; and Chicago, Illinois, because he owned the only railroad between those cities - the Lake Shore and Michigan Southern Railway (LS and MSR). In addition, he was the richest man in America at that time.

The Wabash mainline ran from St. Louis, Missouri to Toledo, Ohio where it was forced to deliver its railroad traffic to Vanderbilt's Lake Shore Railroad for deliver to the eastern United States.

Gould and Vanderbilt together oversaw all east-west rail traffic in the mid-west. The owners (the Seney Syndicate) of a 350-mile railroad, the Lake Erie and Western Railroad, were interested in tapping new sources of revenue. The stage was set for the creation of the New York, Chicago and St. Louis Railroad.

The Seney Syndicate met at Seney's New York bank and organized the New York, Chicago and St. Louis Railway Company on 3 February 1881. The original proposal for the NYC and St.L was a 340-mile railroad west from Cleveland to Chicago with a 325-mile branch to St. Louis.

On 13 April 1881 the NYC and St.L Railway Company bought the Buffalo, Cleveland and Chicago Railway, a railroad that been surveyed from the west side of Cleveland to Buffalo running parallel to Vanderbilt's LS and MSR.

The idea of an east-west railroad across northern Ohio was very popular with the people of Ohio. They wanted to break the high freight rates charged by Gould and Vanderbilt. No one was less popular in Ohio than Vanderbilt since the December 1876 collapse of  LS and MSR's Ashtabula River trestle 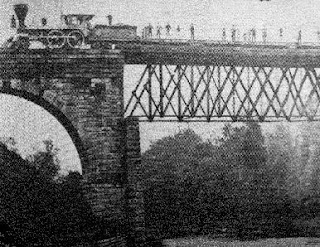 The lead engine made it across the trestle, a second engine, two express cars, and part of the baggage car rested with their weight upon the bridge while 11 railcars fell into a raging fire. The wooden cars were set aflame by kerosene-heating stoves. Of 159 passengers and crew onboard that night, 64 people were injured and 92 were killed or died later from injuries. It was the worst railroad tragedy to that point in American history.

Another reason for the popularity of the NYC and St.L was the positive economic impact on cities that any new railroad went through at that time. During a newspaper war to attract the NYC and St.L the Norwalk, Ohio Chronicle Newspaper referred to the NYC and St.L as "... double-track nickel-plated railroad." The NYC and St.L adopted the nickname and it became better known as the Nickel Plate Road.

In 1880, a survey was made from St. Louis to Fort Wayne, Indiana, to connect with the Lake Erie and Western Railroad, of which Mr. Brice was President. The survey was purchased by the Syndicate and two new surveys made, one from Chicago to Fort Wayne, the other from Fort Wayne to Cleveland, originally intended as an eastern terminus of the road. It was finally determined to temporarily abandon the St. Louis branch and instead build from Cleveland to Buffalo.

Early in April 1881, Major Henry L. Merill, an experienced railroad builder, assumed charge of construction. Contracts were let for 45,000 tons of steel rails at $65.00 per ton. The first rails were laid between Arcadia and McComb, Ohio, and the road was practically finished by September 1882. The first train was run over the road October 22, 1882. 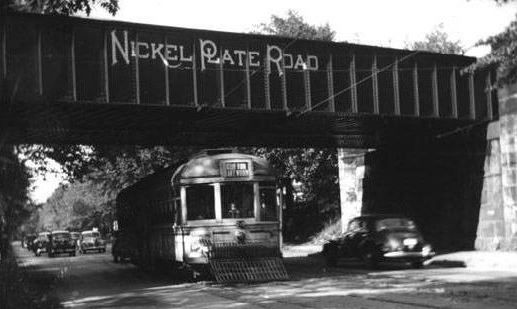 Vanderbilt realized if he allowed Gould to gain control of the Nickel Plate his monopoly on rail traffic from Toledo, Ohio - east would be broken, so he tried to lower the value of the Nickel Plate by organizing a campaign to smear its reputation before a train ever ran on its tracks. If Vanderbilt was successful he could scare the Seney Syndicate into selling to him or drive the railroad company into bankruptcy. However, Vanderbilt's plan came with two important risks. If he slandered the line he risked chasing the Seney Syndicate into an alliance with Gould. The other risk was that his plan to smear the Nickel Plate's reputation might fail and it could quickly grow.

Vanderbilt claimed the road was being built with substandard materials and it would use unsafe practices once completed. He succeeded in creating long-standing rumors about the line, but failed to devalue the company or scare the investors.

They did try to ally with Gould.

The cost of construction was higher than expected and the Seney Syndicate began to negotiate with Gould to purchase the railroad, but unlike Vanderbilt, Gould lacked the capital. Frustrated at the failing talks, Gould broke off negotiations and gave up on his attempt to break Vanderbilt.

Vanderbilt consolidated many of his railroads into the New York Central Railroad, but in 1915 Attorney General of the United States advised the New York Central that its controlling interest  of the LS and MSR and the Nickel Plate was in violation of the Federal antitrust laws

Over time the Nickel Plate had been reduced as a serious threat to competing lines and in return for operating concessions and access to certain stations, the New York Central sold the Nickel Plate to the Van Sweringen brothers of Cleveland, Ohio.

The LS and MSR was controlled by the New York Central Railroad's Alfred H. Smith, a close friend of the Van Sweringens.

Smith called his friends, the Van Sweringens in February 1916 and offered them the Nickel Plate. They bought it for 8.5 million dollars in April 1916. They only put up a little over half a million dollars but they controlled 75% of Nickel Plate's voting stock.

The Van Sweringen brothers were looking for ways to expand their real estate business in Cleveland and bought the Nickel Plate to acquire a right-of-way for a new traction line. The Vans soon found how nice railroading was and in a matter of a few years became very powerful railroad barons. 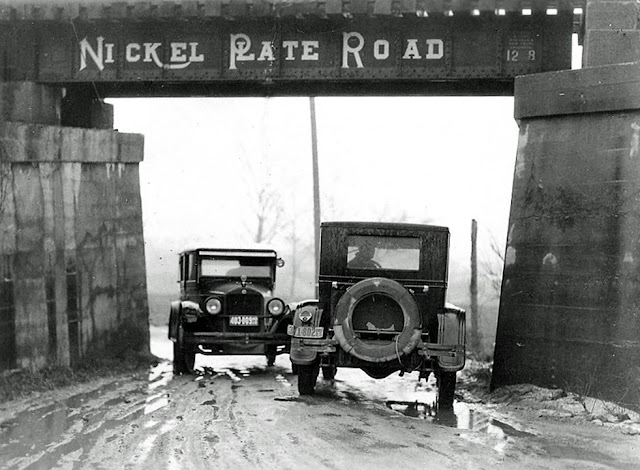 On July 1, 1922, the Nickel Plate Road was operating 523 miles of track between Chicago and Buffalo. On this date the NKP secured control of the properties formerly operated, managed, and controlled by the Lake Erie and Western Railroad Co. The LE and W added 707 miles of track reaching from Sandusky, Ohio to Peoria, Illinois, with two branches in Indiana.

On July 15, 1922, another 453 miles were added to the system by affiliation with the cloverleaf (TStL and W RR) reaching from Toledo, Ohio to St. Louis, Missouri. Thus, the Nickel Plate became a 1683-mile system of trackage serving the industrial, agricultural, and distributing region between the Mississippi River on the west, the Great Lakes on the north, and the Niagara Frontier on the east, with close traffic arrangements and service to the New England States and the Atlantic Seaboard reached through connecting lines.

The Nickel Plate purchased its first fifteen Berkshire (2-8-4) steam locomotives in 1934. Until that time the NKP had never had a locomotive that was out of the ordinary. With the Berkshire, the NKP acquired an engine perfectly suited to its needs and virtually every 2-8-4 locomotive built afterwards was based on the very successful design of the 700's.

The 1940's found the Nickel Plate setting record after record with the Berkshires. An additional fifty-five were built during the War. 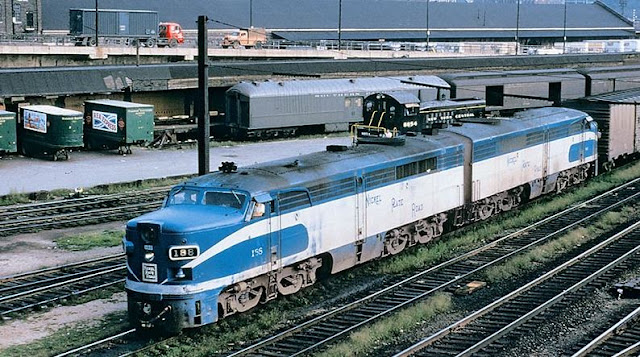 terrific photo of cool old trucking in the top left, tractor trailers middle left, and a Harriman baggage car in the middle, above a square nose diesel