the factory cheated too... Jack Werst's Super Bird, also known as the "Cheater Bird" was built specifically to take out Ray Allen, driving an LS6 Chevelle that was causing problems for Chrysler in a certain drag class. 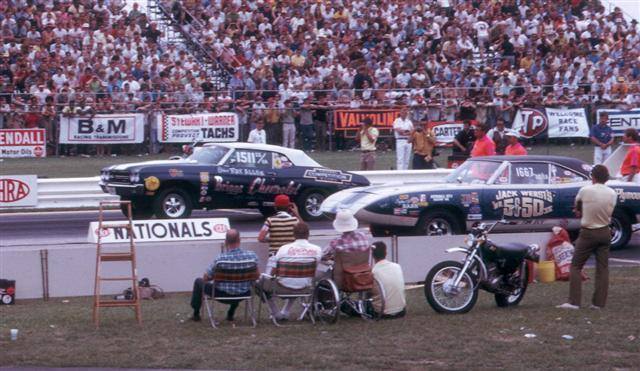 Arguably one of the most famous Super Stockers of 1970, the Fathom Blue, white striped Briggs Chevrolet/Truppi-Kling 1970 Chevelle SS 454 LS6 convertible, driven by Ray Allen, was also one of the most successful, winning nearly every NHRA-sanctioned race it entered in 1970.

The “Killer Car”, as it was called, dominated its competition in SS/EA, winning the US Nationals, the Super Nationals, the World Finals, and most of the division races it entered.

In fact, Ray Allen’s Chevelle was so dominant that Chrysler built a special Superbird with the sole intent of taking out Ray and his pesky Chevelle. Regrettably (or perhaps by design), Ray took himself out before Jack Werst’s Superbird had a chance.

By years end, Ray Allen’s 1970 LS6 Chevelle convertible had laid down a best elapsed time of 11.05 seconds, set a National record in SS/EA with an 11.33 ET, and was crowned as the 1970 Super Stock World Champion. 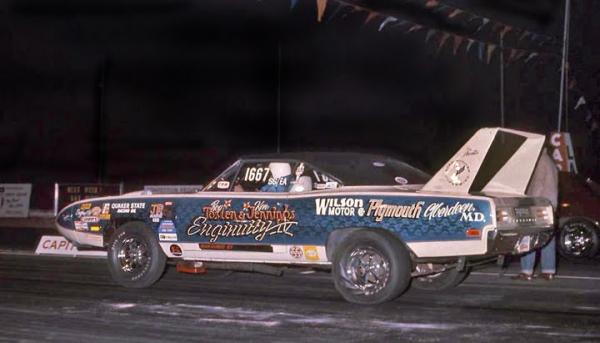 First off, the rear axle is moved forward 2-1/2 inches, and the wheel well is opened up. Why isn't it obvious? Hamerly's job, as the painter, was to use colors and create patterns that would distract the eye from the alterations. Obviously, he was successful. The engine is moved back 2 in. The right front wheel is moved 1-1/2 forward of the front left, for a big advantage in the staging beams. The fenders and hood are lightweight metal (not acid-dipped). The rear glass is thicker and heavier than stock, and the filler panel around the glass is weighted. Also weighted is the upper center tail panel, and there's additional weight behind the tail lamps. The wing supports are pot metal, but the top of the wing is heavier than stock. A 1-1/2-in. thick sheet of lead, hidden underneath the rear package tray, runs the width of the car. Other mods that probably were legal, included a Prestolite transistor ignition up in the nose of the car, and an auxiliary electric fuel pump inside the frame above the left rear wheel. 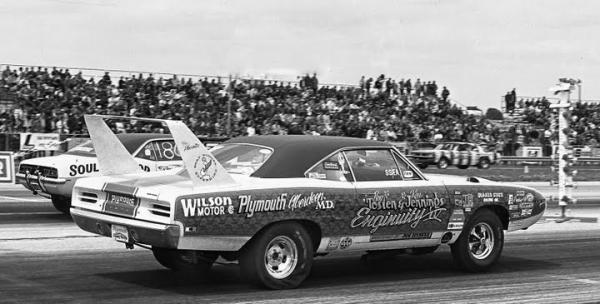 Jack Werst's car was originally a Petty car that Chrysler re-routed. It was factory built as a stick and later converted to auto.

There are quite a few "hidden" tricks that MANY people never knew and might not believe. The wheelbase was changed.

The well-tuned 512 cu. in. Hemi cheater motor Chrysler built to beat Ray Allen was immediately removed and sent back to Chrysler after the race that never was. Werst red-lighted on purpose so the car could not be torn down.

The sail panels were filled with ballast.

The engine was set back. 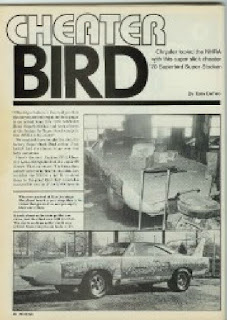 Chrysler engineers put together two SuperBirds for Indy--an automatic, that would be driven by Jack Werst, to compete with Ray in SS/EA and a 4-speed which would be campaigned by Ronnie Sox in SS/E. Werst's Bird came to the race shop as a radio-delete 4-speed car, that the engineers converted over to a 4-speed, swapping out the Dana rear for the auto-correct 8-3/4.

The fender tag, as decoded by Galen Govier, indicates a special-order car for the sales bank. According to Jack Werst, the Bird was delivered to the race shop with no vinyl top--something that all SuperBirds came with in order to hide the filler panel for the smaller rear glass.

The 426 Hemi that was in the car at the time it was dropped off at the race shop was built by Frank Bash--considered to be the Ray Barton of his day. According to Werst, the Bash powered Bird ran a best of 11.03 at 118 mph. Good, but not good enough to beat Ray Allen. But, Plymouth was holding a trump card.

According to Werst, "when you worked for Chrysler, you did what you were told." So, when the trucking company dropped off an engine that was shipped from Chrysler, nobody asked any questions. The Bash motor came out and the new engine went in. Now, this was no ordinary 426 Hemi, but a well-tuned 512 cu. in. Hemi cheater motor.

So, just how quick was this 512 Hemi SuperBird? A week before Indy, Werst made one time-trial pass at Atco Dragway in New Jersey and clocked a 10.39 at 122 MPH--a track record.


Jack Werst, had named his Hemi Plymouths "Mr. 5 and 50", a reference to his side career as a regional warranty manager in the Philadelphia area.

Offered a job as a Chrysler management trainee, Jack earned his moniker when the regional sales manager named him Mr. 5 and 50 after a Chrysler warranty promotion. Armed with an A-990 Plymouth Hemi, Jack gained national attention by going deep in Super Stock eliminations at the U.S. Nationals in both 1965 and 1966. That led to him receiving one of the first flyweight Hemi Barracudas built by Hurst Performance.