the Gaucho, developed as an air transportable vehicle. One can be stacked on another in order to save space, which can be airlifted by a C-130 Hercules or similar military cargo aircraft. 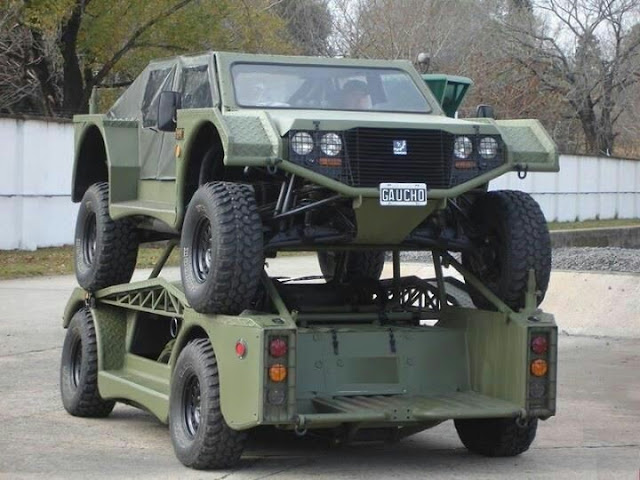 The Gaucho has a frame of tubular construction with built-in roll cage. This vehicle is essentially a buggy, that combines high speed and good cross-country mobility. It is intended for scouting, special operations and hit-and-run style raids.

A baseline Gaucho has a doorles open-topped body. However there is a version with doors and roof, and another lightly armored version. Some vehicles are fitted with a roof-mount for a 7.62-mm machine gun.

The Gaucho is powered by an MWM 2.8-liter turbocharged diesel engine. It is worth noting that MWM International Motores is a Brazilian subsidiary of Navistar International, producing diesel engines for Latin America.

It was jointly developed by Argentina and Brazil in 2004. It was developed using readily available components in order to reduce development time and production costs. Argentina was responsible for the development of chassis, transmission, suspension and steering. Brazil was responsible for engine, transmission, transfer case, fuel, electrical, brake and cooling systems, armament and accessories. A prototype was publicly revealed in 2006. Brazil lost interest, the project fizzled out, and the remaining stock was sold off through exporting.