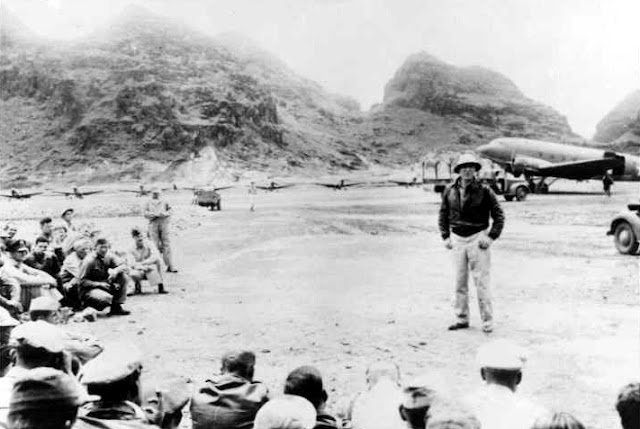 by his count, he had survived 135 brushes with death, starting at age 8

His dad died when he was 12

At age 16 he was the mechanic for the Frayer Miller race car in the 1906 Vanderbilt Cup
He raced a Duesenburg in the Sioux City 300 in 1913
He raced a Maxwell in the 1915 San Fransisco Gran Prix
When America entered the war in 1917, Rickenbacker volunteered and wanted to learn to fly, but at 27 he was overage for flight training and had no college degree.However, because of his fame as a race car driver, he was sworn in as a sergeant and sailed for Europe as a chauffeur. He managed to wangle an assignment driving Col "Billy" Mitchell's flashy twin-six Packard. He pestered Mitchell until he was permitted to apply for flight training, claiming to be 25, the age limit for pilot trainees.
He also set a land speed record of 134 in the Blitzen Benz, a chain driven car.
He raced in the Indy 500 4 times
Capt. Eddie Rickenbacker, Ace of Aces, future President of Eastern Airlines and future owner of the Indianapolis Motor Speedway, he bought and operated the Indy speedway from 1927 to 1945.. .. and improved the track by banking the turns.
In Jan of '43 Captain Eddie Rickenbacker was making a fast inspection tour of American War Plants for the Secretary of War, (as president of Eastern Airlines, he was very qualified to assess airplane production) and when due to look over Ford Willow Run Plant at Detroit, it was arranged for the publicity photo (top 2) moment to occur and a bit of nostalgia for the old Hat in the Ring emblem.Not long after Rickenbacker finished the stateside tour, Secretary of War Stimson asked him to do the same thing in the Soviet Union - that is, undertake a three-month inspection tour of the aircraft factories and air defense system to see how the Lend-Lease equipment was being used.