The cars were being hidden from the IRS as the owner was in trouble for non payment of tax, Hurricane Charlie brought them out of hiding 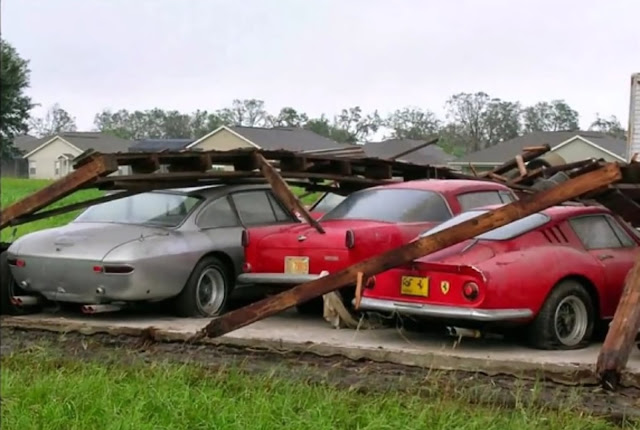 The pictures of the Ferrari Formula cars and the Avanti were part of a collection owned by noted Ferrari collector Walter Medlin of Kissimmee, Florida.

According to an August 25, 2014 article in the Orlando Sentinel, when Hurricane Charley hit Florida in 2004, it blew by Medlin's lakefront Kissimmee home, ruining his metal barn on West Lake Tohopekaliga, which, sadly, held 18 Ferraris and a Studebaker Avanti.

According to the Sentinel, "Years earlier, Medlin had invited automotive writer Bill Warner to take a look at the barn's contents that were estimated to be worth $50 million to $60 million. Within months of Hurricane Charley, the IRS filed a $3 million tax lien against him and seized a 1967 Ferrari 330 P4 valued at $10 million.

Shown a picture of the destroyed barn, Warner said it held different cars but estimated a Ferrari 275GTB and a Formula 1 race car in the wreckage might be worth $1.5 million.

Days later, the vehicles were removed to an undisclosed location.

In 2005, as the IRS auction of the 12-cylinder race car was going to be held, Medlin paid the $3 million he had owed since the 1980s. "I'm sure he's very happy," said his Orlando attorney, Mark Horwitz, after Medlin's payment stopped the sale."

The 71 year-old Medlin is currently serving out a 30 month prison sentence for tax evasion.