Dan Gurney's career launch was in a Corvette at Riverside, but here is some real crazy "Rest of the Story" info 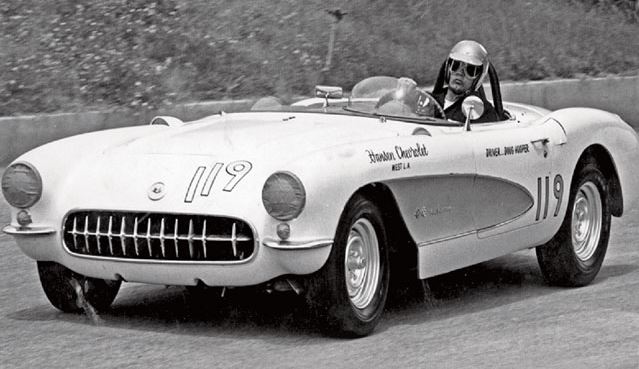 This is the Corvette that belonged to Cal Bailey. A colorful person known as "Mr. Corvette" back in the day. He got his start racing by buying a 300 SL from Lance Reventlow

In 1957 and 58, Bailey entered every Southern California Cal Club event from Palm Springs to Pomona as well as a few Northern California SCCA events. An erratic driver, he was not very successful.

He let Dan Gurney drive it at the opening race at Riverside Sept. 3-4,1957. Gurney won class that day and launched his career. It was Dan's only ride in a Corvette.

Then Bailey lost his marbles in 1966, and tried to kidnap the son of tire magnate Harvey Firestone.

Fire­stone was the third son of founder Harvey S. Firestone, and was a director of the global company and president of its California subsidiary in January 1966.

He lived in a luxurious home among Hollywood stars in Beverly Hills, and neighbors included Jimmy Stewart, Walter Matthau, and Randolph Scott. He was part owner of the California Angels and Los Angeles Rams. He was chairman of the University of Southern California board of trustees, national executive of Boy Scouts of America, and director of the Salvation Army.

Calvin Bailey went to the house with a pistol, a halloween mask, and a roll of tape to kidnap the 58 year old, and hold him for ransom. A cop answered the door and unloaded two shells of 12 gauge into him.

Bailey had already served 12 years in prison for robbery in the 40s and 50s in two foreign countries.