Ever wonder where Sinclair gas stations originated from? I did 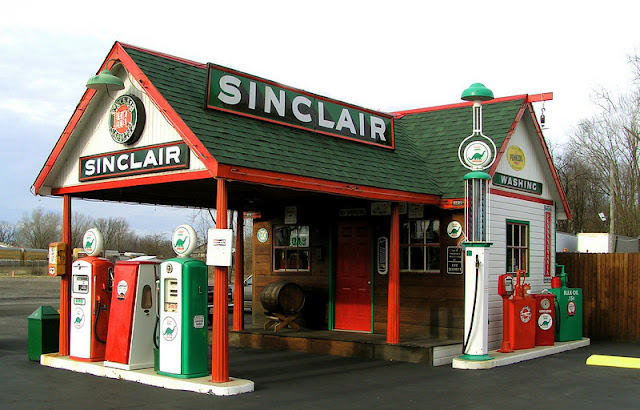 Harry Ford Sinclair's drilling syndicate at Kiowa, Oklahoma, netted him $100,000 in 1904, which allowed him to develop 100 wells in Oklahoma’s Canary Oil Field. He then cast those profits into the Glenn Pool, Oklahoma's first huge producer. Glenn Pool spawned the Oklahoma oil boom, which eventually paid out more money than the California gold rush and the Colorado silver rush combined.

It made Harry Sinclair a millionaire. By 1907, he was the richest man in Kansas.

Harry Sinclair was soon the midcontinent's largest oil independent – but he was irked by the entrenched operators and their price policies. Sinclair decided to fight the giants on their own ground.

He borrowed $20 million from New York bankers, and on May 1, 1916, assembled bits and pieces of depressed properties, five small but profitable refineries, and many untested production leases to establish the Sinclair Oil & Refining Corporation, headquartered in New York.

He couldn’t have timed his new venture better: Europe was at war, and vehicles were converting from coal to oil fuel; Henry Ford had rolled out the $350 Model T; and overproduction of oil forced many independent producers to sell their interests at a fraction of their value. Sinclair's defiance of the established companies inspired many marginal operators to join him.

In the brief space of a month, the fledgling corporation soared to a height occupied by only nine other American petroleum companies.

Sinclair Oil and Refining Corporation increased its assets by 40 percent to $70 million in its first 14 months.