the 1939 Duesenberg Coupe Simone Midnight Ghost, completely a "might have been" with a made up back story, and the Franklin Mint bought it hook, line, and sinker. So did I. 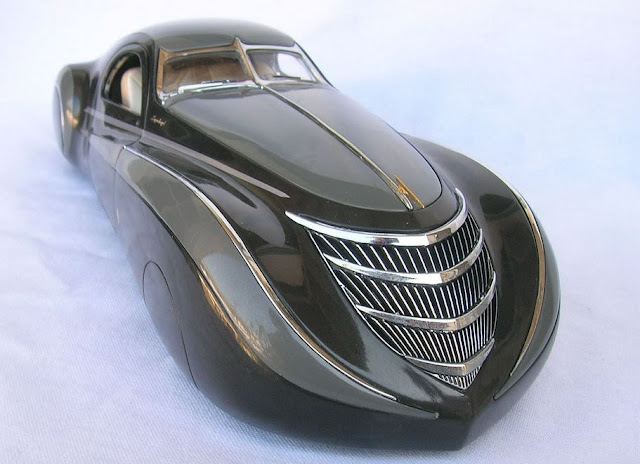 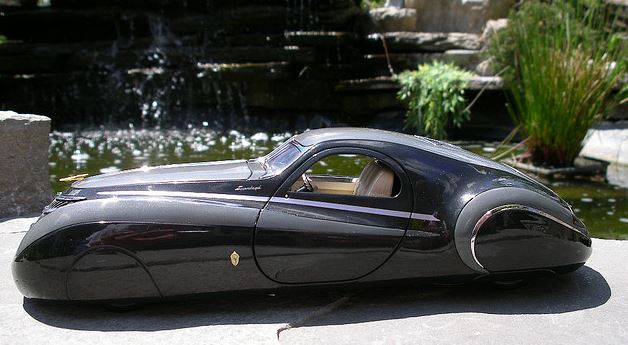 1939 Duesenberg Coupe Simone Midnight Ghost - LE Issued on the 10th anniversary of the car that never was, this incredible die-cast model is the creation of acclaimed designer Raffi Minasian. Inspired by the modernist lines of the Art Deco movement, it captures all the romance of a bygone era. The graceful sweep of the fenders, the luxuriously appointed interior complete with a crystal-clear steering wheel - every detail of the designer's vision brought unforgettably to life. Hand-painted an elegant Midnight Ghost, this special anniversary Limited Edition bears the designer's signature on a plaque mounted to the undercarriage.

The Coupe Simone – A Brief History

The story of the Duesenberg Coupe Simone and Emmett-Armand Coachworks was first revealed in 1996 at The Franklin Mint Museum exhibit, "Crossroads." created by Designers Roger Hardnock and Raffi Minasian,

–It's basically a rip off of the Phantom Corsair mixed with the Jonkheere Rolls Royce
at Saturday, July 06, 2013