The man who got to push the detonator on the old Woodrow Wilson Bridge demolition, was chosen because he won a contest for having the shittiest commuter experience with the bridge. 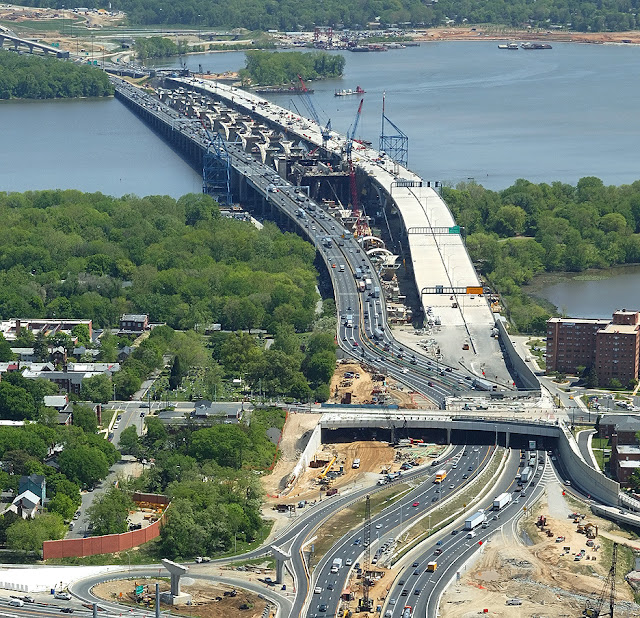 The Wilson Bridge commute that was officially declared the worst ever starts each day at 5 a.m. at the Accokeek home of Daniel G. Ruefly. Somewhere around 90 minutes later, depending on about a thousand things on his 50-mile drive from Maryland to Virginia and back, he gets to his job in Rockville.

He said he's been doing this every workday for the past 30 years.

Which is a lot.

As if that's not enough, it's painful for Ruefly to sit still for so long, because driving aggravates the hip injury he suffered when his pickup truck slammed into the back of an illegally parked tractor-trailer on the bridge in 1999.

Want more? The injury was made worse when the ambulance taking him to the hospital was stuck for more than 30 minutes waiting for the drawbridge to lower.

All the pain Ruefly has suffered won him top honors yesterday in the Woodrow Wilson Bridge Project's "toughest bridge commute" contest. His reward comes Monday at 11:59 p.m., when he gets to push the plunger that will blow up part of the old bridge that made him suffer so.

"It's not unbearable. It's something I've got to live with," a stoic Ruefly, 53, said of his commute. "It's time [for the bridge] to be replaced, and I'm honored to be the one selected to push the plunger."

Bridge officials said a panel of five traffic reporters selected Ruefly out of 312 people who wrote essays sharing their tales of woe because of all the years he's been navigating the bridge and because of his hip injury.


The hundreds of entrants recalled some of the worst days in the bridge's 45-year history. There was the time a tractor-trailer carrying livestock crashed and several horses went loose, their tails streaming behind them as they galloped past the stuck cars. Others recalled the terrible snowstorm of 1987 when drivers were trapped on the bridge overnight, slowly watching their gas tanks drain to empty. Many mentioned the "Day of the Jumper" in 1999, when a suicidal man threw himself over the side after a seven-hour standoff with police froze the region's traffic -- and survived.


Construction of the bridge began in September 1958, and it opened to traffic on December 28, 1961. Edith Wilson, the widow of President Woodrow Wilson, died that very morning; she was supposed to have been the guest of honor at the bridge's dedication ceremony.

One of the reasons for the demolition of the old bridge was that no one had predicted the traffic it would get, as it was not originally planned to be part of the major north–south Interstate 95, but rather, as part of the circumferential Capital Beltway. So they didn't design it to be wide enough and long lasting enough for the only major interstate on the East coast.