A Kiss For Luck! Jack Davis art that makes a scoreboard a wonderful thing that could occur before getting the plane off the ground 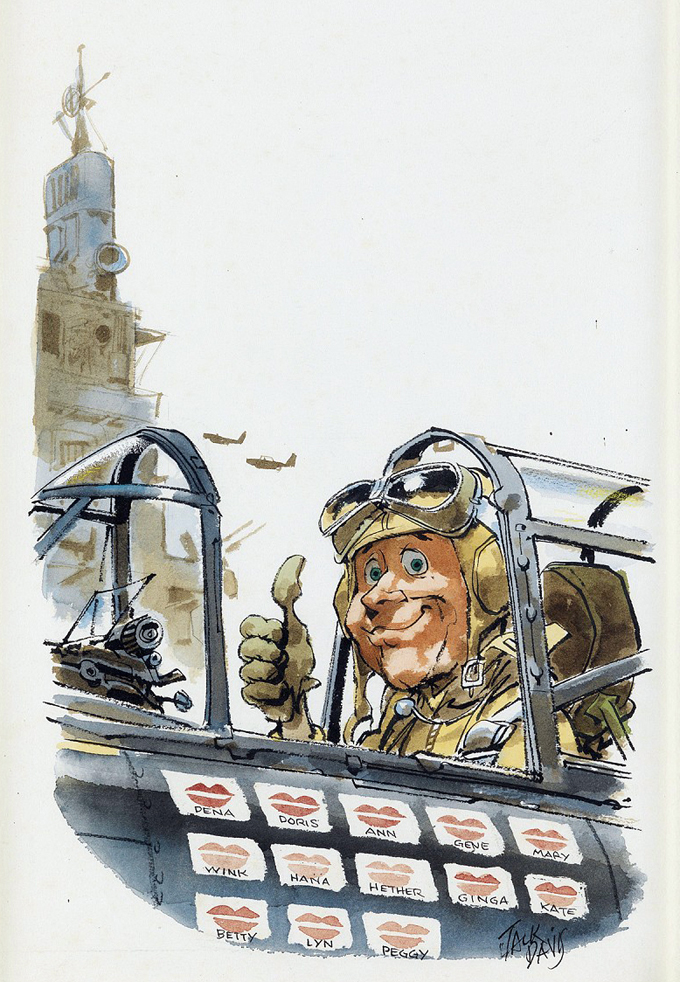 After high school, he joined the Navy for 3 years, serving in Guam, where he drew a comic called Boondocker for The Navy Times.

He returned to his home state and enrolled in the University of Georgia Lamar Dodd School of Art under the G.I Bill, where he drew for the student newspaper. Before long, his teachers were encouraging him to go to New York to pursue his art career. He moved north and enrolled in classes at the Art Students League.

After moving to New York in 1949 and studying at the Art Students League at night, he made his first entry into the art field as an inker for a comic strip, “The Saint.”

He got his start in 1950 selling drawings to EC Comics, which published horror fiction titles like “Tales From the Crypt.” Two years later, amid an outcry over the potentially harmful effects of violent comics on children, the company started what became Mad magazine, edited by Harvey Kurtzman. Mr. Davis was a member of the “Usual Gang of Idiots,” the nickname for the crew that put out the magazine.

He was soon heavily involved in comic art of every description, and became one of its top practitioners for Mad Magazine, Trump, Playboy, and many other publications.

Jack has illustrated more than 100 books. He is an award-winning advertising artist with countless print ads to his credit. He’s a much imitated comic book artist and a prolific magazine illustrator​ for Esquire, Playboy, LIFE, and many others​. He worked for MAD - off and on - for 46 years. He’s a world-renowned caricaturist. He has illustrated​ many magazine covers including 23 for TV Guide​ ​and for ​25 ​for ​TIME magazin​e. He has done ​more than 65 record album covers and more than 40 movie posters in addition to animation, games, calendars, greeting cards​ and ​t-shirt designs.

Mr. Davis was a prolific artist, drawing posters for movies like “It’s a Mad, Mad, Mad, Mad World” and “The Long Goodbye,” as well as record album covers.

The National Cartoonists Society honored him with a lifetime achievement award in 1996, and he was inducted into the Society of Illustrators Hall of Fame in 2005.

For a better article on his work that goes into great detail https://www.wgauradio.com/news/local/famed-bulldog-artist-davis-dies/hR6RNzNfY0DexaG1RCZRoM/?fbclid=IwAR1oyRt9F6W1wHcSbyJEyqmX3aiTP85yM-rEOSmCcFnJ3PaeZXJupgeC_gs

For example, he created the cartoon bee which (in decal form) appears on the flanks of all the buses in the Bee-Line running from Westchester to New York City. A Westchester resident at the time, Davis lived directly adjacent to one of the Bee Line's bus routes, and he mentioned in an interview how gratifying it was to see his own artwork drive past his window several times every day.