the only black on black 1976 Lamborghini Countach LP400, and no one ever drove it much, except the factory... just kept in their private museums... only has 344 miles on it, if you'd like to trade 1.5M for it. 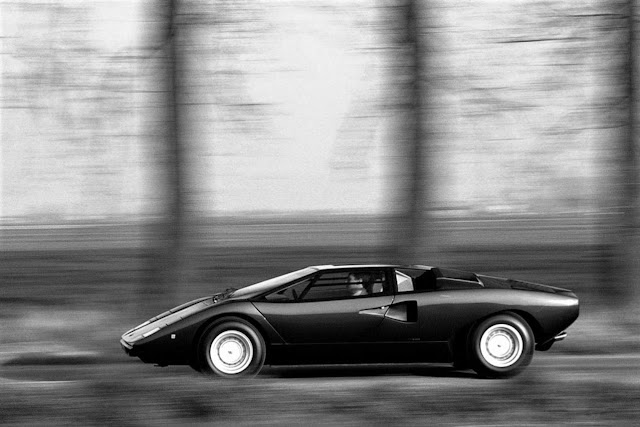 According to Lamborghini's records, 1120182 as noted was initially destined for Toumblast in Lebanon. The order requested the vehicle be completed in black with a black interior. This was the sole example so completed of the 150 examples built. Because of the civil war in Lebanon the order was modified and the vehicle not completed until May 14th of 1976. Shortly after completion, this LP400 was photographed during a driving test and the photo used by Lamborghini for promotional purposes.

In the Fall of 1976, this LP400 was sold and shipped to the Lamborghini Distributor in Japan where it was photographed again shortly after arriving which now showed it fitted with the required side, rear-view mirrors and larger front turn signal lamps. It remained with the Lamborghini Agent in Nagoya, Japan until finally being sold new to the first owner on December 12th, 1977. The original owner was Mitsuo Sanami of Tokyo, Japan. Sanami was a well-known Japanese celebrity and prominent car collector. He was a champion trap shooter who represented Japan in the 1964 Olympics. The car was delivered to him but not road-registered and remained un-driven during his five years of ownership.

In 1982, Sanami sold this vehicle to Isao Noritake, Japan's most famous Lamborghini collector and also the chairman and founder of the Japan Lamborghini Owner's Club. As with the previous owner, Noritake did not road-register this LP400 and it remained un-driven in his private museum until being sold to his friend Yoshiaki Okada who likewise, never drove or registered this Lamborghini.

In 1990, Noritake repurchased this LP400 and due to lack of use and servicing, had it shipped back to the Lamborghini Factory where it was given full services, and a complete repaint and fully refurbished interior. The work took two years at a cost of $160,000. The car was then returned to Noritake where it again remained un-driven and un-serviced. The odometer at this time showed just 540 original kilometers, all of which are believed to have been added solely by Lamborghini after completion and during testing and again in 1990-1992 when Lamborghini restored the vehicle for Noritake.