if someone had told me last week that I'd post twice about John Oates, I'd have been quite surprised... but after finding him racing the Pink Pig Porsche tractor, now I learn he's been a lifelong go cart racer and car collector 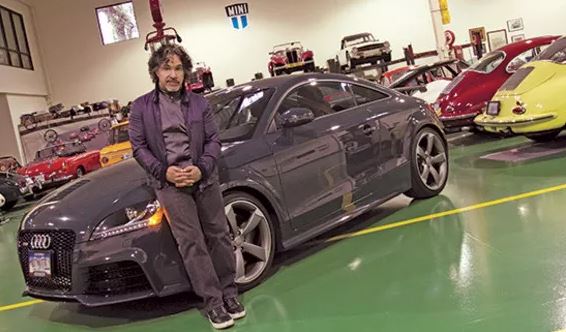 John Oates, the guitar and mustache half of the Hall and Oates, one of the most iconic mustaches of the Seventies and Eighties—which was no mean feat in those impressively hairy eras, and one of the most impressive musical groups

His interest in racing was ignited by the discovery of a box of discarded Road and Track magazines he found while walking in his childhood neighborhood of North Wales, Pennsylvania. “I went to a lot of races while I was growing up,” he admits. “Then I started to race go-karts for a while, and that led to racing cars. As Hall and Oates became more successful, I also started collecting cars. I’m still a car fan and gearhead. I don’t race anymore, but I love driving. I don’t collect anymore, but I still have a few cars.”

"I went from go-karts to Formula 4 to Sports 2000, which is an amateur and professional series. I did a few rides in IMSA in a couple of Porsches, and I finally ended my career by crashing my Pontiac Fiero at Elkhart Lake."

In 1977, the same year that Oates bought his first Porsche, he met racecar driver Richard Lloyd. With Lloyd’s help and encouragement, he signed up for racing school and eventually earned an SCCA (Sports Car Club of America) competition license. While Hall and Oates were experiencing new levels of success during the early Eighties, Oates was enjoying a second career and similar rise in success as a professional racer.

Sadly, Oates sold off his impressive car collection in 1987 after his accountant revealed the shocking news that Oates was broke due to mishandling of his band’s business affairs. The collection included a 1955 Chevy Bel Air convertible, a 1956 Porsche Speedster (“the only car in the bunch I wish I still had”), a 1967 Austin-Healey 3000, a 1967 Jaguar XKE, and a custom-built 1984 Porsche Carrera that he had special ordered from the factory in Stuttgart. Cars that Oates had owned previously were equally impressive, including a fire-engine red Rolls Royce Corniche convertible and a 1977 Porsche 930 Turbo Carrera.

Oates also has two daily drivers: a Toyota Tacoma truck that resides at his mountain home in Woody Creek, Colorado (“I live on a dirt road out there, so basically I need a truck”) and a Volkswagen Golf R. “The Golf is actually one of my favorite cars that I’ve ever driven,” he admits. “I’ve driven everything from the most exotic vintage sports cars to modern things like the Porsche GT3, but I really love the Golf R. It’s a fantastic car to drive for doing your everyday thing. Whenever I get in the car it’s a really enjoyable driving experience. It’s really well put together and has a lot of well-thought-out features.”