The new retirement plan, working where ever and traveling by RV. The New Reality Of Old Age In America: 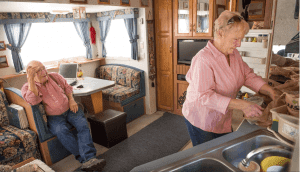 Joanne and husband Mark, both in their early 60s, in the RV that has been their home for several years, managed a camping park in Trenton, Maine, for the summer season.

This is life without retirement, living full-time in RVs traveling to jobs instead of enjoying their Golden Years.

People are living longer, more expensive lives, often without much of a safety net, but with credit card debt.

As a result, record numbers of Americans older than 65 are working — now nearly 1 in 5. That proportion has more than doubled over the past decade.

And keep in mind, the $22,000 a year from Social Security has remained steadily decreasing in contrast to inflation with health-care, electricity, water, gasoline, and heating costs have soared.

While some work by choice rather than need, millions of others are entering their golden years with alarmingly fragile finances. Elimination of pension jobs in the U.S., the bankruptcy of Chrysler and GM, eliminated their payments of retirement benefits, plus changes in many retirement programs in the white collar management career jobs, and the military retirement benefit shrinking,  has added to shifting responsibility for saving from the employer to the worker, exacerbating the nation’s rich-poor divide.

Two recent recessions devastated personal savings. And at a time when 10,000 baby boomers are turning 65 every day, Social Security benefits have lost about a third of their purchasing power since 2000.

“There is no part of the country where the majority of middle-class older workers have adequate retirement savings to maintain their standard of living in their retirement,” said Teresa Ghilarducci, a labor economist who specializes in retirement security. “People are coming into retirement with a lot more anxiety and a lot less buying power.”

Websites such as the Workamper News list jobs as varied as ushering at NASCAR tracks in Florida, picking sugar beets in Minnesota and working as security guards in the Texas oil fields.

“I’m going to work until I die, if I can, because I need the money,” said Richard Dever, 74, who drove 1,400 miles to this Maine campground from his home in Indiana to take a temporary job that pays $10 an hour.

The Devers are better off than many Americans. In 1960, when John F. Kennedy and Richard Nixon were running for president, Richard started repairing homes and Jeannie made root beer floats in a drugstore back home in southern Indiana, near the Kentucky border. Later, they ran a business that put vinyl siding on homes and a little start-up that sold Western-themed knickknacks.

They raised two children and lived well enough but never had much extra cash to put away. After a lifetime of working, they have a small mobile home, a couple of modest life insurance policies and $5,000 in savings.

One in 5 Americans have no savings, and millions - 1/3rd of our population has no pension no retirement savings and nothing in the bank, according to a 2015 report from the U.S. Government Accountability Office.

Meanwhile, the 401k system has been a gold mine for Wall Street. Brokerages and insurance companies that manage retirement accounts earned roughly $33 billion in fees last year, according to the Center for Retirement Research at Boston College.