the water in Flint Michigan was so bad, it damaged the fire department engine pumps. 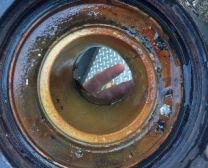 At just a year-and-a-half old, Fire Engine 61 is the newest in the Flint Fire Department's fleet, but look a little closer and you'll see it...

"The intake valve, we see rust around it. We also have rubber that seals [the valve]. Those are being destroyed by whatever is in the water," said Fire Chief David Cox Jr.

The damage was brought to his attention about a week ago by emergency equipment mechanic Mike Taylor. Another photo shows pieces of Flint's water line getting caught in the pumps.

He also says the corrosion in the pump shouldn't be happening for several years, but Fire Engine 61 went into service shortly after the switch to the Flint River.

"We actually called the manufacturers of three of our fire trucks and they gave us some ideas of how to combat that a little bit, but what's done is done and we're hoping it doesn't get to a point where we have to replace pumps," said Cox.

Which is what happened to the pump of a much older truck, discovered in November. An invoice provided to the department estimates 65,000 dollars in needed repairs.

Cox says he's informed Mayor Karen Weaver of what's happening. In the meantime, the goal is to prevent the problem from getting worse in the other trucks. The department is hoping the weekly flushing of the pumps and avoiding hydrants with dirty water will help.

So far, Cox says the corrosion has not impacted the department's ability to fight fires.

"We test those pumps every day and if they're not working right...then they won't be in service," he said.

The department is also trying to address concerns that the water could be corroding fire suppression systems around the city. Cox says a fire lieutenant is calling sprinkler installation companies to see if they've inspected systems installed in homes and businesses. Fire Department inspections in the spring should help to shed some light.