it was a 1935 Packard hearse that served as the inspiration for the song 'My Generation" by Pete Townsend and The Who. 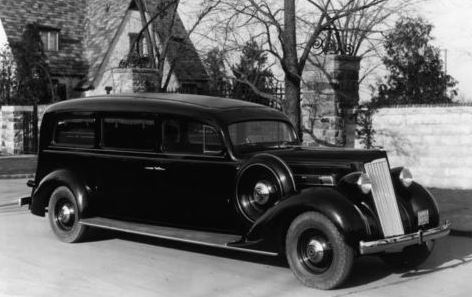 The 20yo Townsend owned a Packard hearse, and kept it parked in front of his house on the road between Clarence House and Buckingham Palace. One day, the car was gone.

“One day I came back and it was gone. It turned out that [the Queen Mother] had it moved, because her husband had been buried in a similar vehicle and it reminded her of him. When I went to collect it, they wanted two hundred and fifty quid. I’d only paid thirty for it in the first place.”

They wanted two hundred and fifty pounds to release the hearse, but Townsend said he'd only paid thirty pounds for it.

As Townshend has told the story, he wrote those lyrics on a train ride from London to Southampton—a train ride necessitated by the towing away of his 1935 Packard hearse

This was the great indignity that prompted Townshend to pen the immortal lyric, “Hope I die before I get old.”

In 1985, he went on to tell Rolling Stone that “‘My Generation’ was very much about trying to find a place in society.” Later in 1989, during a Good Morning America interview, Townshend spoke about the famous line “I hope I die before I get old” and said that for him, “old” meant “very rich.”