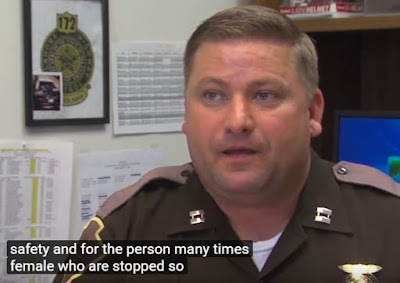 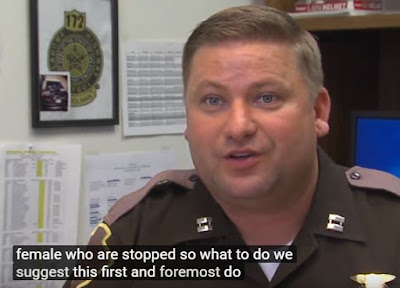 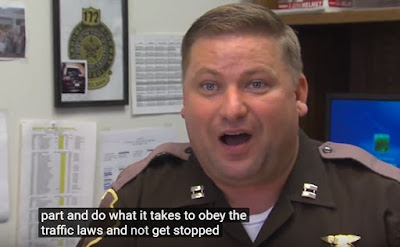 those are all in sequence, so you can read that I haven't editted his words, and right there, he says, "For the person, many times female" which raises the question, are the highway partrol in Oklahoma targetting women, so they can rape them?
To continue: "For the person, many times female, who are stopped, so what to do? We suggest this first, and foremost, do YOUR part, and do what it takes to OBEY the traffic laws, and not get stopped"

Well, I bet his mom is proud of him.

Or watch the video, which has been pulled down before, and that's why I put up the screen shots, you tube can't remove my screen shots, but they can kill the following video, start it about 45 seconds in.

Maybe, you're simply wondering, why is he being interviewed? Why am I talking aboubt the Oklahoma highway patrol raping women that they pull over?

Oh, that. Well, the above video interview with spokespig was on Sept 24th, 2014, by KJRH -TV in Tulsa Oklahoma.

he was being interviewed to get it out on public record what the police had to say about the 3rd serial rapist highway patrol officer being arrested.  Roberts was among three Oklahoma law enforcement officers accused of sexual misconduct on duty around the same time in 2014.

The head of the Oklahoma Highway Patrol has said Roberts turned off his dashboard camera during six traffic stops, including two referenced in the lawsuit.

in September 2014, former Tulsa County sheriff’s deputy Gerald Nuckolls was charged. He was convicted last year of sexual battery and indecent exposure for his actions while on duty — touching a woman’s breast and exposing himself while he said he was looking for drugs. He was sentenced to eight years in prison.

Former Oklahoma City Officer Daniel Holtzclaw was convicted in December of raping and sexually victimizing women while on his beat and was sentenced last month to 263 years in prison on 18 separate counts, including first-degree rape. He had been arrested in August 2014.
http://ksn.com/2016/02/04/judge-refuses-to-dismiss-rape-charge-against-ex-trooper/

In 2011, prosecutors charged Venable with second-degree rape after an investigation revealed enough evidence to charge him with pulling over a drunken driving suspect, put her in his car, driving her to her home where the two had sex. Venable told investigators about two other sexual encounters he had while he was working as a state trooper, according to court documents. http://newsok.com/article/3595051 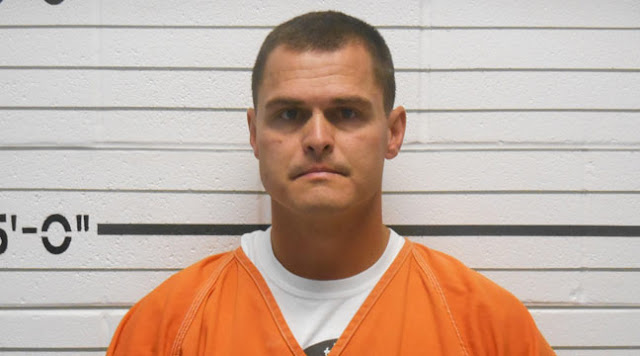 SAPULPA, Oklahoma - The Oklahoma Highway Patrol arrested a 43 year old trooper Monday for kidnapping, sexual assault, second-degree rape, forcible sodomy and rape by instrumentation against the women, who were 28 and 22 at the time.

Eric Roberts was suspended with pay, but the termination process was begun, according to Chief of Patrol Col. Ricky Adams. A woman accused Roberts of raping her during a traffic stop in west Tulsa this summer, launching an investigation into the trooper's behavior.


He was charged the following month with more than a dozen crimes, ranging from second-degree rape and sexual battery to charges alleging that requests he made during traffic stops amounted to requests for a bribe.

Having pulled over one woman, learning that she had an arrest warrant outstanding, he didn't arrest her. He raped her. Then, he went back to work, and she went on her way. Think that is police procedure? The unwritten one in Oklahoma maybe. http://www.tulsaworld.com/homepagelatest/prosecutors-dismiss-sexual-battery-charge-filed-against-former-ohp-trooper/article_d59340dc-890a-555c-bdc1-e8cf740dbd66.html


2 years later, Dec 2016:
A former Oklahoma Highway Patrol trooper is headed to prison for more than eight years after pleading guilty to two felonies and a misdemeanor. The prison sentence is the result of several women accusing Eric Roberts of sexually assaulting them in his patrol vehicle.

Want to read what his dad (Sonny) had to say when he son was walked out of the court room?

Sonny went on to suggest that when other officers participate in similar lewd actives, it's swept under the rug.

"Yeah, he got caught doing something that many officers have done. I think the woman that accused him were just after money, notoriety or whatever," he said.

Think that's a unique incident? You'd be wrong. A San Diego PD patrolman was arrested and jailed for raping homeless women and prostitutes. See, they are doing something illegal, and police figure they'd rather have sex, than get arrested, and won't try to get the cops arrested for rape, as that would incriminate themselves as prostitutes.  http://fox5sandiego.com/2014/04/23/women-give-graphic-testimony-about-groping-by-ex-cop/#axzz2zjIn15s0

Why am I bringing up old news? Well, just because it happened a while ago, does not mean that it doesn't matter, or that cops get excused for what illegal things they've done after a couple years has passed.

It happens to be that the only way you can find out what happened in court is to wait two or 3 years in most cases. Then you find out, was the perp guilty, or falsely accused.

So, ain't it nice cops are for some reason on paid vacation while suspended and waiting to be tried and jailed for rape?

The Associated Press had a yearlong investigation into sexual misconduct by law officers, which found that about 1,000 officers in the U.S. lost their licenses for sex crimes or other sexual misconduct over a six-year period.

So, as I've said before, record every transaction with police, whether you're involved or not. It will probably be the only evidence of their behavior, good or bad.
http://www.news9.com/story/26252799/lawsuit-accuses-oklahoma-highway-patrol-trooper-of-rape

And if it's something the cops are doing worth respect, let me know. I post that too, it just doesn't happen often.  http://justacarguy.blogspot.com/2017/10/know-why-kids-dont-dress-up-as-cops-but.html
at Wednesday, December 20, 2017