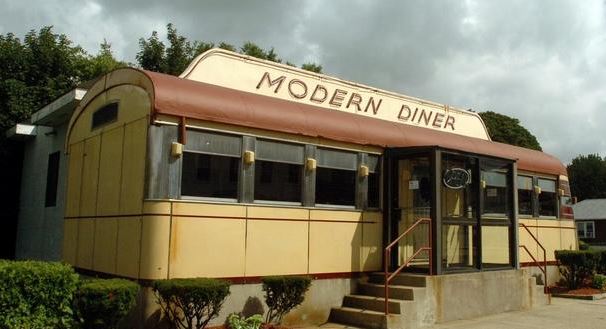 The birthplace of the diner, Modern Diner is operated inside of an old rail car just like the first diners were. Nick Demou and his father opened the place 28 years ago. In 1978, the Modern became the first diner ever entered on the National Register of Historic Places

Since then the restaurant’s top dish has become the Custard French Toast, born out of an accident. Fifteen years ago Nick had made too much vanilla pudding, so he thinned it down and served it as a custard on French toast made from thick-cut Texas toast. It also includes a topping of fresh strawberries, blueberries, sliced kiwi, house-candied pecans and raspberry syrup.

Also on the list: No. 2 Chicken Pot Pie at the Agawam Diner in Rowley, Massachusetts;
No. 3 the Nebulous Potato Thing at St. Francis Fountain in San Francisco’s Mission district;
No. 4 The BW Benny at Harry’s Coffee Shop in La Jolla, California; and
No. 5 Meatloaf at 24 Diner in Austin, Texas.