Some ships are christened with a bottle of champagne, some bridges are smacked with a big rig trailer. 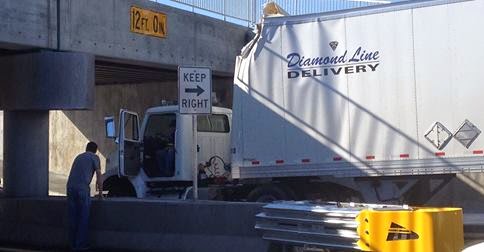 Just one hour after opening the new bridge, some moron smashed into it http://m.localnews8.com/news/crash-closes-newly-opened-dstreet-underpass/27772912

Mitch Anderson, who works at Oswald Service near the underpass, said he was helping a customer outside the auto shop when he saw the crash.

"I just turned and I was like, 'Really? Already?' You know, I can't believe,” said Anderson.

"I had a customer stop in just this morning and he was saying, 'You know, Kevin, it would be a good promotion to take bets on when the first accident's going to happen in the underpass,” said Kevin Oswald.

Idaho Falls police said the driver of the truck, 31-year-old Ryan Blatter of Idaho Falls, has been cited for inattentive driving.
at Friday, August 29, 2014