Amazing, Stephen Wright has duplicated the Studley tool chest in wood... that is an amazing tribute to a masterpiece 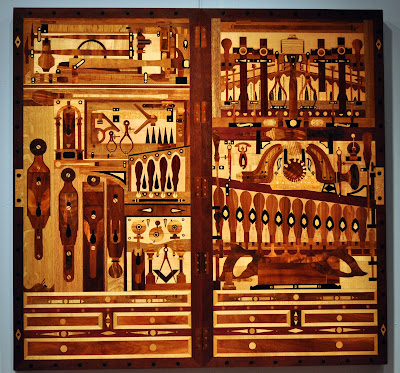 I came across this at the San Diego County Fair,... in the wood wood working display area, I had never even heard of before... wow, lots of great stuff there! 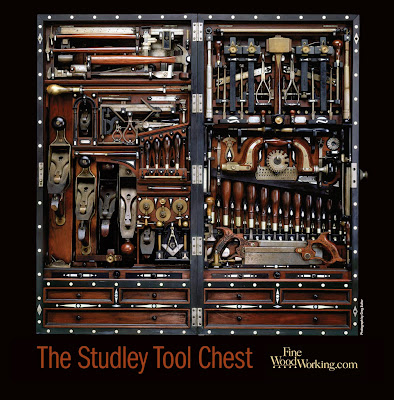 I posted the Studley tool chest a couple times before below: http://justacarguy.blogspot.com/2008/07/look-at-tools-cause-without-them.html is it posted with a couple other incredible tool collections, but now I've just found the video posted below

In July 1988, the back cover of Fine Woodworking magazine featured an awe-inspiring unrivaled object: the vintage 19th-century tool chest of Massachusetts master carpenter, piano maker, Henry Studley built his magnificent tool chest over the course of a 30-year career at the Poole Piano Company.

The chest lived on the wall near his workbench, and he worked on it regularly, making changes and adding new tools as he acquired them. Using scraps from piano making ebony, mother-of-pearl, ivory, rosewood, and mahogany -- all materials used in the manufacture of pianos -- he refined the chest to the point that now, more than 80 years after his death, it remains in a class of its own. 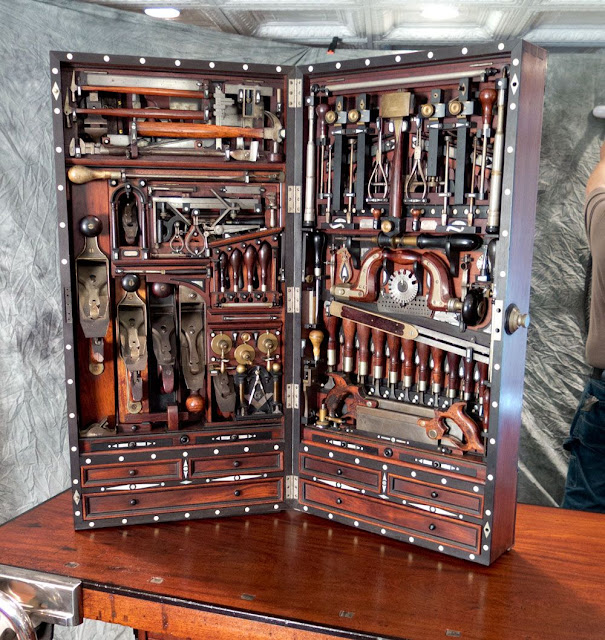 For every tool, Studley fashioned a holder to keep it in place and to showcase it. Miniature wrenches, handmade saws, and some still unidentified piano-making tools each have intricate inlaid holders. Tiny clasps rotate out of the way so a tool can be removed. In places the clearances are so tight that the tools nearly touch.

In an oak clamshell box adorned with rosewood, ebony, pearl and ivory, Studley kept both tools he made and a collection of the finest hand tools made prior to 1900, including a complete set of woodworking tools as well as machinist and stonemasonry tools. To pack the 300-plus tools into a case only 19 1/2 inches wide, 39 inches long and 9 1/2 inches deep, Studley devised a jigsaw puzzle arrangement of flip-up trays, fold-out layers and hidden compartments. Maine native Pete Hardwick originally owned the chest, which had been in his family since it was bequeathed to his grandfather by Studley.

Hardwick acquired the chest from his brother by trading a 1934 Ford sedan for it. A good trade? It would seem so: Just one tool - the Stanley No. 1 plane housed in the ebony archway in the upper-left part of the chest - was appraised at $700.00 in 1993. This tool chest was carefully restored to its original splendor and glory, loaned to the Smithsonian Institution, then displayed in the National Museum of American History as the centerpiece of woodworking and other tradesman tool chests. Studley's chest then changed hands again (for an undisclosed $$$ amount) to another private collector.

the most incredible thing is that even though to see it open is amazing, you don't realize how much more is in store until you see on the video that what is on the surface are just racks, and they hinge up to expose another layer below! See it on this video

Studley was well into his 80s when he retired from the piano company. Before he died in 1925, Studley gave the tool chest to a friend. That man's grandson, Peter Hardwick, loaned the chest to the Smithsonian National Museum of American History in Washington, D.C. in the late 1980s and later sold it to a private collector
at Sunday, June 26, 2011