The person in the gold colored Honda fled the scene. Let that sink in a moment. After causing deaths and devastating lives, they cut out 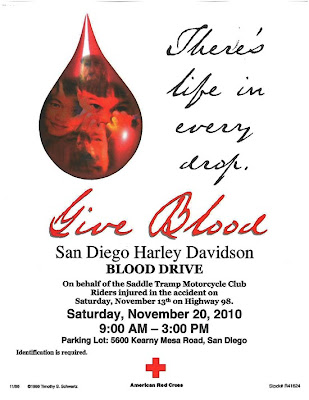 http://www.sandiegoharley.com/event_detail.asp?event=473746
It was this past Sunday morning in California . Four bikers died in a brutal accident, five others are hospitalized. Those who lived have now lost their friends, and those who died left behind kids, brothers and sisters, parents and friends. They were members of the Saddle Tramps Motorcycle Club. It was the clubs 10th anniversary ride.

The club members were riding about 80 miles East of San Diego when a Gold Honda Accord came up from behind them and tried to pass them . Another car was in the oncoming lane, the driver tried to avoid the Honda by swerving off to his right, he lost control when overcorrecting when he hit the shoulder on his side of the road and crashed with the group of motorcycles. The driver of the Accord fled the scene.

Two memorial services are planned for this weekend, and several fundraising events are in the works to help the affected families, one is tomorrow (Saturday Nov 20th) at San Diego Harley, on the East side of freeway 163 between Clairemont and Balboa Avenue

Nov. 28: Pat & Oscar’s in Parkway Plaza, El Cajon, 2 to 9 p.m. Twenty percent of sales will be donated to a Heath family trust.

To help out: People wishing to donate to the Saddletramps can send contributions in care of the Smiths, 16204 Alpine Blvd., Alpine, CA 91901.
http://www.signonsandiego.com/news/2010/nov/19/a-path-to-tragedy/

Be careful out there biker friends http://justacarguy.blogspot.com/search?q=careful
at Friday, November 19, 2010