All we know is, he's called the Stig (the funny opening lines) 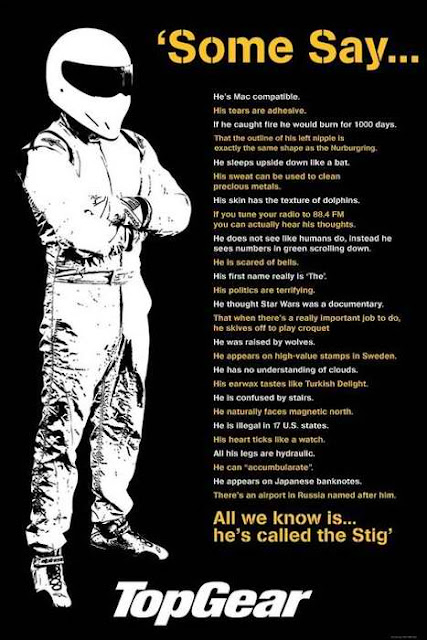 he is afraid of bells,
confused by stairs.
his voice can only be heard by cats,
he never blinks, but when he does, his eye lids are side to side blinkers
naturally faces magnetic north
all his legs are hydraulic,
he has two sets of knees,
and heart ticks like a watch
He is hinted at being a wild creature, spending his spare time catching fish with his tongue or foraging for wolves in the woods.
his face appears on high-value stamps in Sweden
his left nipple is the shape of the Nürburgring,
he invented the curtain,
his salary is paid by the BBC in strong pornography
he is illegal in 19 US states
he is afraid of ducks
his breath smells of magnesium
his tears are adhesive
if he caught fire he'd burn for a thousand days
he has a digital face
his crash helmet is based on Brittany Spears head
he has no understanding of clouds
his earwax tastes like Turkish delight
he isn't machine washable
his first name really is "the"
he sleeps upside down like a bat
if you tune your radio to 88.4, you can hear his thoughts
on really warm days he sheds his skin like a snake
he's allergic to the Dutch
if he could be bothered, he could decoded the DaVinci code in 43 seconds
his sweat can be used to polish precious metals
http://en.wikipedia.org/wiki/The_Stig

if you want to read a LOT more : http://www.topgearshow.com/page/The+Stig+Quotes