Superbirds, Daytonas, and winning at Nascar 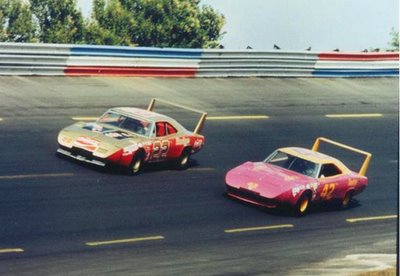 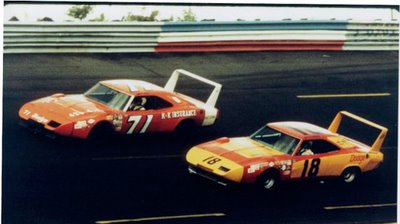 The Dodge Charger Daytona was a design for peak aero efficiency on the superspeedways of Nascar, and it worked. Even Richard Petty left his Ford Sponsor when he saw the writing on the wall of how much easier it would be to win in something that had half the drag and more downforce than anything Ford or Chevrolet had in production, plus it had the 426 hemi. Winning combo. (The one year production had the Chrysler camp whipping up a Plymouth Superbird for 1970, which fixed the slow speed ((55 mph)) overheating problem the Daytonas had).

The '69 Charger Daytona set speed records at Nascar and Bonneville. First car to top 200 (Buddy Baker) at a Nascar track, and Bonneville clocked it at 217.368 in the flying kilometer. (Hot Rod fall 2006 Archives # 4 page 75). Great pictures on http://speedzone70.tripod.com/wing.html and a good brief history at http://www.allpar.com/model/superbird.html

The wing was so strong, many adults climbed on the middle of it for photo oportunities, startling pictures when that wing looks so thin, and wide, but it was built strong enough to push the rear of that 3400 lb car down at 220 miles an hour, and that is mighty strong.
at Wednesday, November 15, 2006