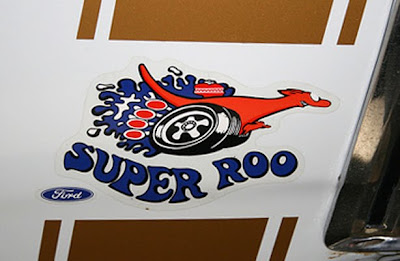 Dodge came up with the Super Bee logo / emblem in 1967 (on the '68 model). Soon after, the Australian Ford division stole the logo, and fashioned a local style from it. Copy cats. 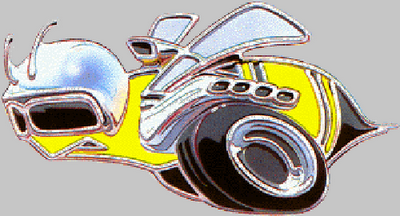 Super Roo was first used by Ford to distinguish its 1970 XW GT Model from the rest. These Aussie cars are form the most part, all 4 door. It wasn't until72 or 73 that the 2 dr was an option. When I was in Australia in 98, I did not see any two door muscle cars, onoy 4 drs. Strange. The other weird Aussie auto culture thing is the predominance of Ranchero El Camino type autos. They have really big brush guard type push bars, and need them, becuase they frequently run into kangaroos. Overly used to humans, stupid, and more suicidal than skunks, rabbits, racoons, and possums combined; the kangaroo is such a vehicle collsion threat the Aussies I talked to are as ambivalent to hitting a roo as we are to hitting a bug... so the cars there all seemed to be equipped with the heavy duty brush guard / push bars.