What has no air conditioning, drives from Florida to California in the June of the hottest summer on record, and only uses one tank of fuel. Crazy people, but they did make it 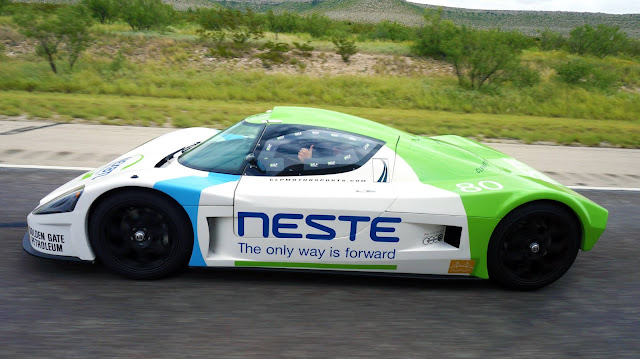 they used an ice suit to keep the driver cool... and stopped often to get more ice.

only one person in the car to reduce weight,
no air conditioning equipment,
aerodynamics of a 300mph car (looks like McLaren design from the front),
and a 70 mpg rating from a VW 1.9-liter turbo-diesel inline four-cylinder motor that is good for around 220 hp rwhp

Instead of only putting 10 gallons of fuel in at a time, they started in Florida with a full tank. I don't think that's a good idea, as a gallon of fuel is about 8 pounds, and every 10 gallons is most of a hundred pounds. Starting a cross country trip with a full tank is carrying an extra 360 pounds you don't need to and hurting your mileage for 90% of the trip.