Hot Rod Magazine, getting better all the time 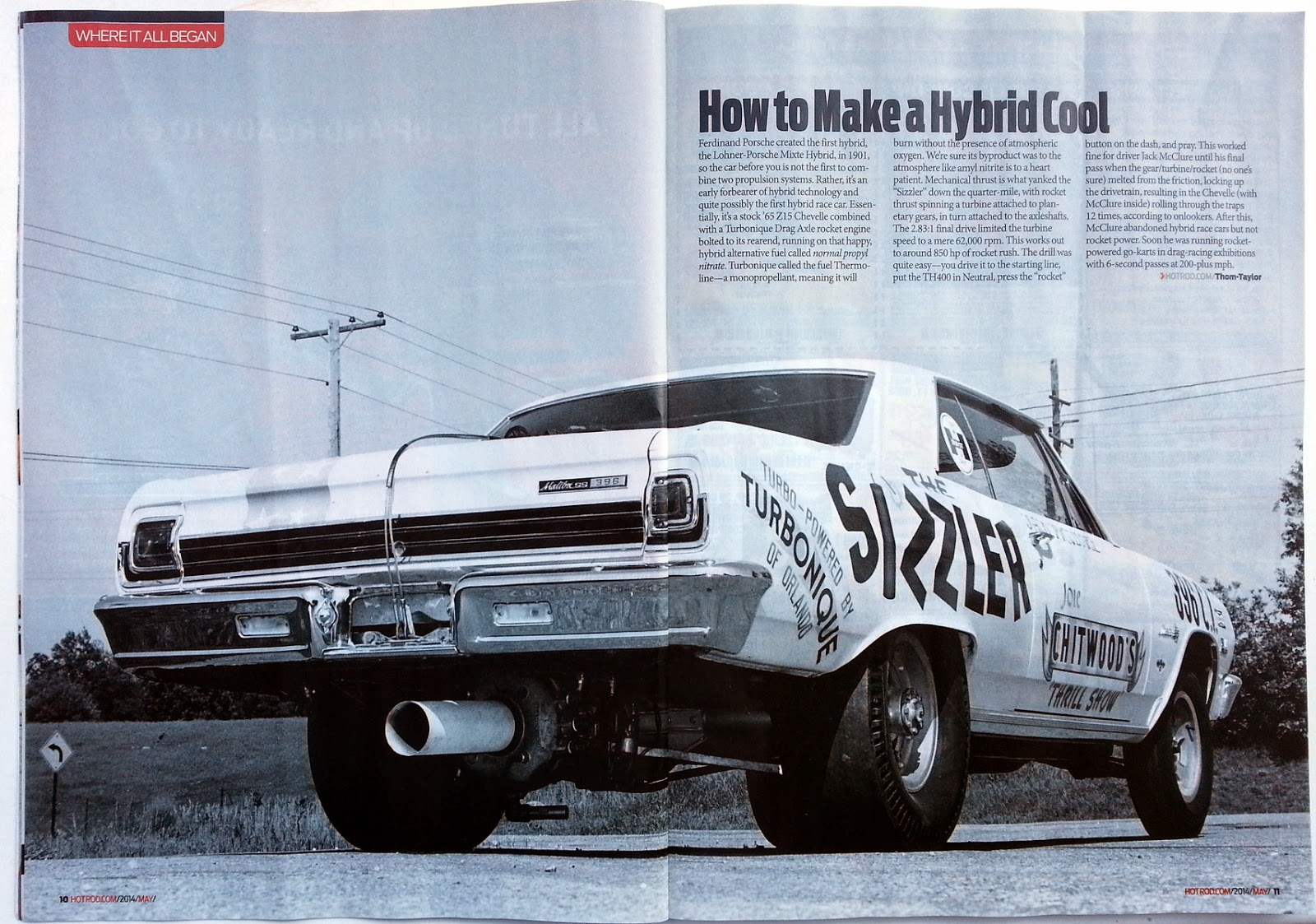 Seriously gets better every month and year

Turbonique was founded in the '50s by Gene Middlebrooks of Orlando, Florida. A former aerospace engineer, Middlebrooks believed that microturbine engines could replace piston engines in drag racing and many industrial and recreational applications. In a 1967 Turbonique catalog, he wrote, "Turbonique's goal of stripping the military price tag from power turbines has at last become a reality through the introduction of the low-cost microturbine."

So what is a microturbine? Simply stated, it's a small version of a gas turbine with one major difference: special Thermolene monopropellant fuel. The term monopropellant describes a fuel that will ignite and burn without the presence of atmospheric oxygen. As a point of comparison, the nitromethane used in Top Fuel dragsters is a semi-monopropellant. It requires a little outside oxygen for complete combustion, but only a small fraction of what is required to burn gasoline, alcohol, or kerosene. Most gas turbines run on petroleum-based fuels that require plenty of air to support combustion. They take in atmospheric air at the front and compress it to a high temperature and pressure. Fuel is then sprayed into this hot air, which ignites, creating the high-pressure gases that drive the turbine wheel and make torque. The problem is that a typical air-breathing gas turbine uses over half of its total turbine power to drive the compressor. Turbonique engineers sidestepped the problem and simply replaced the weighty, expensive, and inefficient compressor with a high-pressure storage bottle containing Normal Propyl Nitrate (Thermolene), a stable, milk-white liquid fuel that brings its own oxygen to the party and that moves the engine into the category of a rocket because it can run without the benefit of atmospheric oxygen. When the Thermolene is introduced to the combustion chamber at 600 psi and ignited by a glorified spark plug connected to an on/off switch, the immediate result is an intense release of hot gases to spin the turbine blades. Anti-swirl turbine wheel vanes prevented flames from exiting the tailpipe, but a special wheel was optional for "spectacular flaming night runs."

Marketed as Thermolene and sold for $3.50 per gallon in 1967, the catalog states that "Normal Propyl Nitrate was selected as the preferred fuel because it is easily ignited, clean burning, and relatively inexpensive. Further, it is compatible with most metals, storable for indefinite periods, and the cautions to be observed are no more involved than those ordinarily followed while handling other fuels such as high-octane gasoline." And according to the catalog, the exhaust plume was "no more toxic than ordinary automobile exhaust." By utilizing this monopropellant to fuel its little monsters, Turbonique wound up with a very compact, light engine with an ability to deliver incredible power for brief intervals.

But as many users quickly discovered, there was too much power. Extreme tire spin (even on the best slicks of the day) made Drag Axle-equipped cars difficult to control. Full-quarter-mile smoke shows
with impressive trap speeds, but mediocre elapsed times were the rule, not the exception.

Turbonique Drag Axles were available with or without a one-way Borg-Warner sprag clutch to automatically disengage the microturbine when not in use for normal axle operation. Prices for sprag-equipped units ranged from $2,430 for model TB-28-C (raw castings with complete blueprints for machining), $3,225 for model TB-28-B (same as TB-28-C but including all needed hardware) and $4,695 for model TB-28-A (factory assembled and ready to run)