The Franklin, an unusual car without a radiator because it was air cooled 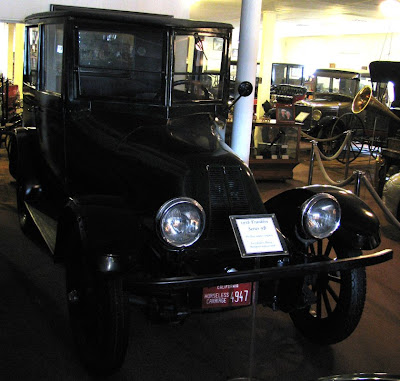 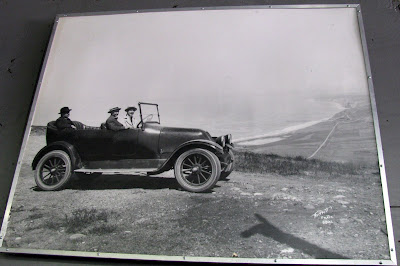 Between 1902 and 1934 in Syracuse, New York a unique car was produced, called the Franklin after it's founder Herbert Franklin, who started out in the metal die-casting business (in fact, he invented the term) before entering the automobile business with the engineer John Wilkinson.
All Franklin cars were air-cooled, for simplicity and reliability over water cooling, and light weight to be well-performing given the limited power of the engine. Most Franklins were wood-framed.
Lightweight aluminum was used in quantity, to the extent that Franklin was reckoned to be the largest user of aluminum in the world in the early years of the company, making the early cars about 1100 pounds, and they only needed a 10 horsepower engine. (Roads were very primitive and you wouldn't go very fast, even with the best sports car of the time)
Franklin cars were technological leaders, first with six cylinders (by 1905) and automatic spark advance, in 1907, and they also were reliability record setting. A Franklin drove from New York City to San Francisco in 1906 in 15 days 2 hours 15 minutes, a new record and twice as fast as in 1904, when it did the coast to coast in 33 days.
Franklins were undisputed leaders in air-cooled cars, because before the invention of antifreeze, the air-cooled car had a huge advantage in cold weather. This made Franklins popular among people who needed an all-weather machine, such as doctors. The Franklin was in such demand that it became the first assembly line luxury car in 1916, only the 2nd of any car manufacturere to utilize such a way, the first was the Ford.
Franklins were often rather odd-looking cars, although some were distinctly handsome with Renault-style hoods. Starting in 1925, at the demand of dealers, Franklins were redesigned to look like conventional cars sporting a massive nickel-plated "dummy radiator" which served as an air intake and was called a "hoodfront". The same year, Franklin introduced the boat-tail to car design.
In 1930 Franklin introduced a new type of engine which ultimately produced 100 horsepower, with one of the highest power-to-weight ratios of the time. In 1932, in response to competition amongst luxury car makers, Franklin brought out a twelve-cylinder engine. Air cooled with 398 cubic inches it developed 150 hp.
It was designed to be installed in a lightweight chassis, but the car became a 6000 pound behemoth when Franklin engineers were overruled by management sent in from banks to recover bad loans. Being overweight and underpowered the Twelve, this was simply the wrong vehicle to be building after the crash of 1929 and the Great Depression. The company declared bankruptcy in 1934.
http://en.wikipedia.org/wiki/Franklin_(automobile) for a gallery of 21 different Franklins in the Tuscon Az. museum http://franklinmuseum.org/photos.htm ranging from a 1904 to a 1934
at Sunday, June 01, 2008