One year ago today, the Waco biker massacre by police snipers, 9 dead, 20 more injured by bullets. Has any info been brought out? What is the hold up? Saving face by police who claimed the biker gang (Black Widows) in the Clint Eastwood movie tipped them off? 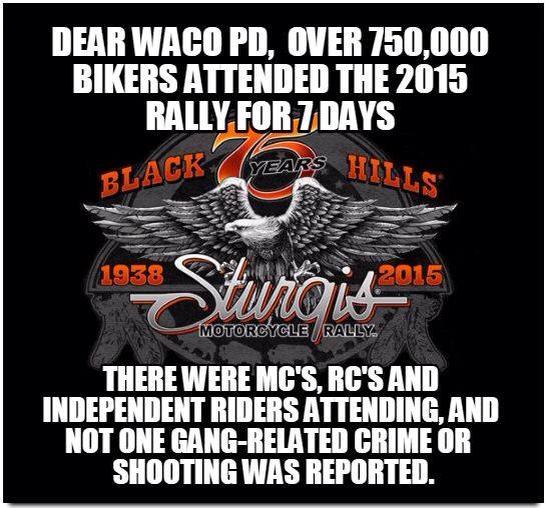 The official police narrative quickly became that this was an entire gathering of organized criminals who were wildly killing each other and shooting at cops, and the arrest of so many people there was buttressed with initial one million bonds set for everyone. And likely in order to justify that crazy, and soon reversed, decision:

The Texas Department of Public Safety did its part to ramp up hysteria, leaking a “confidential bulletin” to CNN alleging that Bandidos in active military service were arming their chapters with grenades and C4 explosives so that they could retaliate against the police. One of the DPS's sources was a club called the Black Widows, which does not exist except in the 1978 movie Every Which Way But Loose. In response, one biker blog jeered: “Waco Police Now Claim They Are Being Attacked by Clint Eastwood and An Orangutan Named Clyde.”

“The city of Waco is looking at paying out hundreds of millions of dollars,” says Michael White, Wilson's attorney. “I don't think we've ever seen something on the scale of 175-plus people being arrested for something they did not do.” To survive the storm, the city's legal strategy seems to be to pressure the Waco 177 into pleading guilty to minor infractions for time served; this would preclude the bikers from being able to sue for wrongful imprisonment.

The judge in the case, Matt Johnson, is the former law partner of district attorney Abel Reyna. Incredibly, the foreman of the first grand jury to be convened, James Head, is a Waco P.D. detective.

There are over 100,ooo residents in Waco, and they cannot find a Grand Jury Foreman not tied into the prosecutor’s office or the Waco Police Department?

No trial dates have been set for the 157 people later indicted, despite pleas from defense lawyers for their day in court.

Authorities still have not spelled out who among the bikers is believed to have shot, stabbed or punched another, and who may have been killed or wounded by police.

The names of the officers involved in the shooting remain secret, and officials won't say if their actions were ever reviewed by internal affairs or a grand jury.

Even where and how trials would be held is unclear.

The first wave of indictments came in November, a federal indictment followed in December in San Antonio, charging the Bandidos' top three national leaders with racketeering and other crimes.

None of those charged was at the Twin Peaks shootout, however, and while the indictment outlines a series of attacks by Bandidos against Cossacks, it does not include the Waco clash.

Houston lawyer Paul Looney, who represents a Waco man facing state charges, said he suspects McLennan County prosecutors are purposely dragging their feet in hopes the cases will be pulled out of their hands and into the expanding federal investigation.

Looney has gone all the way to the Texas Court of Criminal Appeals, the state's highest criminal court, to force the Waco judge to set a trial date for his client.

There has been no response from the appeals court - not even a request for a briefing, he said.