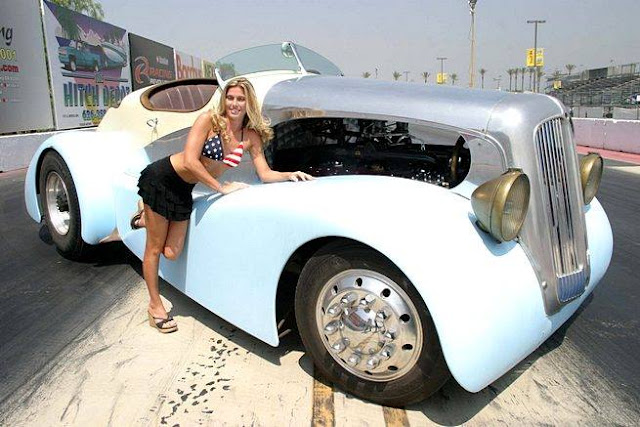 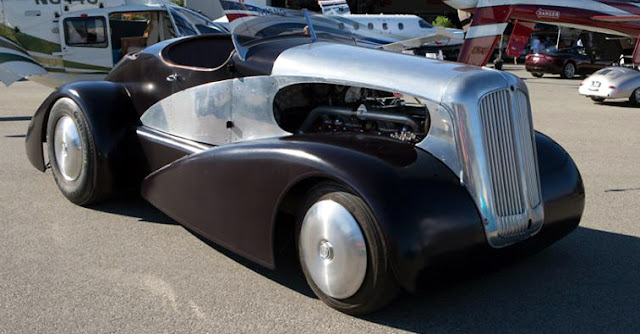 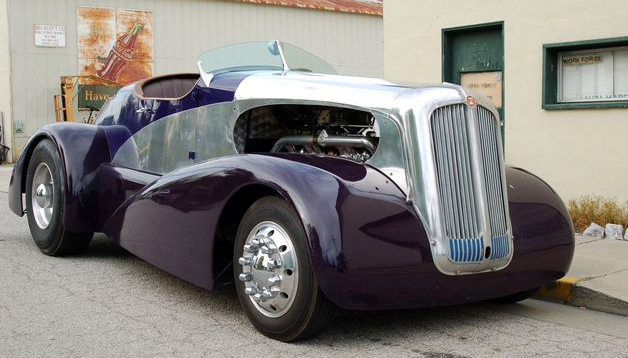 In the late 1960s when a young art student named Michael Leeds discovered a well-stocked junkyard in Monrovia, Calif., while searching for project material. He paid $250 for the front half of a "retired" 1941 Seagraves hook-and-ladder truck and drove it 360 miles to his shop with the 1,000-cubic-inch V-12 engine only managing three miles per gallon.

He became obsessed with the idea of transforming the Seagraves into a boat-tailed roadster - Living the bohemian life in an abandoned redwood water tank in the old orchard, ingenuity and resourefulness was the name of the game - A ’49 Studebaker pickup truck hood was turned around backwards and became the top of the boatail.

Big Bertha was modified, sold, bought and traded several times during the next 30-plus years, but the ever-changing beast kept returning to Leeds' garage.

Three times from '72 to '90 Big Bertha went to a new home, and three times Michael bought it back.

Normally pulling all 9,600 pounds of Big Bertha down the road would be a formidable challenge, however this truck was built to haul an 85-ft. aerial ladder and is equipped accordingly. Under the hood is a 980 cubic inch V-12 Seagraves engine. Powerful and rugged, these power plants were designed to run continuously at fire scenes for as long as necessary. For reliability the engine has redundant ignition systems with two plugs per cylinder, two distributors, four coils and the pan holds 25 quarts of oil. Behind the brawny mill is the original Eaton four-speed.

During the mid-1990s, the artist committed himself to transforming the Seagraves into the magnificent hot rod he always imagined it could be.

Drawing inspiration from a 1924 Hispano Suiza Tulipwood Torpedo-a wood-bodied roadster that France's Nieuport Aviation crafted for aviator/race car driver André Dubonnet-Leeds devoted years to creating each and every body panel on the car.

His plan to execute a "simple, practical" design was discarded when he met glass artist and hot-rod fanatic Randy Grubb, who convinced him the project deserved every ounce of creativity Leeds could muster. As a result, the fenders and "boattail" segment were elongated to give Big Bertha perfect, 1930s-era proportions.