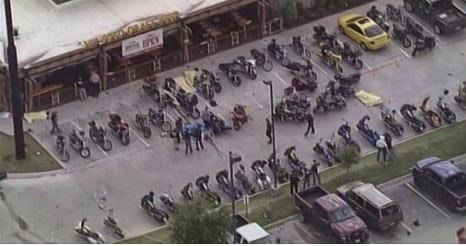 The Texas Region One COC and Independents meeting was scheduled to begin at one p.m. The fight began about 12:15.

Local police had urged the restaurant, a Hooters knock-off called Twin Peaks, to refuse service to bikers. Waco police claim the violence could have prevented if Jay Patel, the operating partner at the independently owned Waco franchise, had simply banned the Confederation of Clubs from meeting there.

When the restaurant refused to ban the Confederation of Clubs, police stationed at least 22 cops including ten Swat officers from the Waco P.D. and the Texas Department of Public Safety in the parking lot outside the restaurant.

The shove in the bathroom became a scuffle in the restaurant. When about 30 Bandidos, Cossacks, Scimitars and other bikers spilled into the parking between the Twin peaks and the Don Carlos Mexican restaurant next door, the police were waiting for them. The scuffle became a knife fight and several men were stabbed. When one of the combatants produced a gun the Swat team opened fire with automatic weapons.

A lot more at http://www.agingrebel.com/12873 but this is the short version without a lot of quotes from the cops and restaurant manager

The motorcycles were confiscated as part of the massive law enforcement investigation and sources say they likely will be seized and forfeited by McLennan County through civil forfeiture procedures and sold at auction.

At least 12 Waco officers, including a SWAT team, and other DPS troopers were at Twin Peaks or in the immediate area when the incident broke out. Waco police officers moved in and did fire rounds during the incident, Swanton said, praising their quick response.

“There were maybe 30 guns being fired in the parking lot, maybe 100 rounds,” said Michelle Logan, 37, who was at Twin Peaks at the time of the shooting and said she knows some of the victims. “They just opened fire.”

Logan said she saw several people injured by the shooting.

The incident did not appear to be random, Logan said.

The meeting between the two biker gangs was being monitored by police before the incident started, Swanton said, after officials became aware that the gangs were frequenting the establishment. Swanton said management at the restaurant was not cooperative with police until after the shooting Sunday.

Officers quickly had bikers at gunpoint after the altercation moved into the parking lot. Suspects were being held at bay as far from the doors of Twin Peaks as the Interstate 35 access road.