The video above and the vette below belong to Danny Reed, who has owned it since 1971 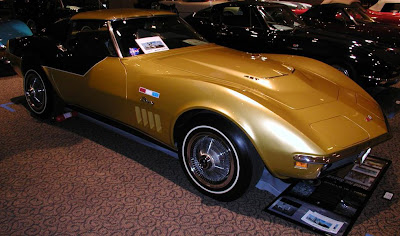 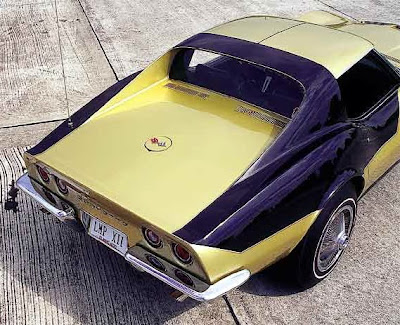 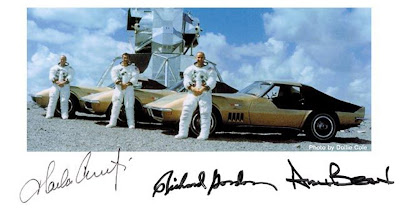 For more photos and the full story : http://www.vetteweb.com/features/vet1101_1969_chevrolet_astrovette_stingray/index.html

Through a special General Motors lease program, astronauts were allowed to drive any car for a year for $1. Bean and his Apollo crew ordered matching Corvettes distinguished by the black "wings" and red, white and blue logos on the front fenders reading "LMP" for lunar module pilot.


Why did they have black rear fenders?

The article states that those cars and the lease program had been arranged by Jim Rathmann, in co-operation with Ed Cole. Rathmann owned a Chevrolet Dealership in Melbourne, Florida.

We know that the Gold & Black combination is typical for Smokey Yunick's cars. And Yunick was crew chief for Rathmann for three years in a row (1960 to 1962) at Indianapolis. When Rathmann won the 1960 Indy 500, his car, named "Ken-Paul Special", was blue. But in '62, he drove the "Simoniz Vista Special" (car #44) which was sporting Yunick's Gold & Black.

Thus the colors of these three "Apollo 12" Corvettes, in the most likely possibility.

One interesting detail in the text deserves a quote: "...Especially Pete Conrad. His checklist of things to do before the flight of Apollo 12 included a call to a friend in the Central Florida Region of the Sports Car Club of America to make sure that all systems were go for his SCCA competition license. Conrad was reported to have said: I'd sure like to have it when I get back from the moon . And he was obliged by being issued 1970 license number 12 in honor of the flight..."

Every astronaut had a Corvette of the day. Every one "made full advantage of the social opportunities".

Every one except John Glenn. Glenn drove a Hillman Minx, and lectured the rest about "keeping it zipped up for the good of the program". http://ferrarichat.com/forum/showthread.php?t=258763

I didn't know it, but Nik did a post on these 2 months ago: http://carrosantigos.wordpress.com/2010/05/11/the-astrovette/ and thourougly explained the astronaut/corvette association, and far better than I could, Nik is a far better writer. His blog is in Portugese, but you ought to install Google toolbar if you haven't yet, and that is because it will instantly translate any website from another language to your own.