the Bloodhound SSC plans for a 2016 run in Africa are improved by lots of rain flooding the dry lake bed right now, which should improve the surface 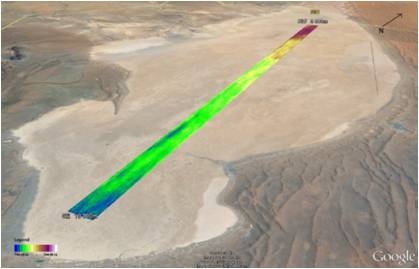 https://www.facebook.com/KalahariDesertSpeedweek/ reports 25 cm of rain, more than the past two years has recently fallen on Hakseen Pan, a dried lake bed surface, which is water-laid and floods regularly keeping it in prime condition.

Hakskeen Pan, the site of Malcolm Campbell’s 1929 record attempt, in the North Western corner of South Africa, was initially dismissed because of a large dirt road running across it. However, last year a new tarmac road was built across the end of the Pan and the old dirt road became defunct.

The new tarmac road has improved access to the lake bed, and in early November 2015 Andy Green made another journey to Northern Cape Province. This time, the news was all good.