B 29, the exploded view, illustrates graphically the Boeing multiline system of production in which major units of the giant bombers are brought together in the final assembly stages, each pre-completed, including installation of electrical apparatus, wiring, tubing, instruments, upholstery, etc., and much of the flying and fighting equipment 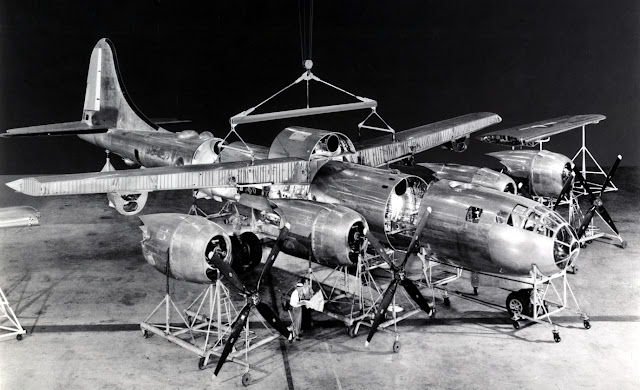 To facilitate the fabrication of such a huge airplane, Boeing engineers teamed up with Boeing production experts in a program of 'breaking down' the design into major units so that the multiline system used so successfully in production of the Boeing B-17 Flying Fortress could be adapted to the big Superfortress. This plan enabled the Wichita Division to get into B-29 production more than a year ago, and in succeeding months to meet--even exceed--the urgent delivery schedules set up by the Army Air Forces. B-29 sections are shown ready to 'fall' into position for a completed Superfortress in the photograph which was 'staged' with the units mounted on dollies and suspended from cranes.

Found on http://digitalcollections.detroitpubliclibrary.org/islandora/object/islandora%3A201929
at Tuesday, August 04, 2015