one thing leads to another, a race car named for a town, that was named for a highway tollgate. True story 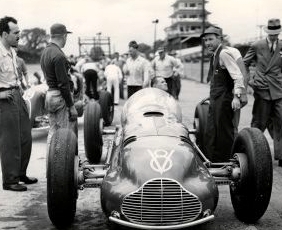 in 1946 Lou Welch’s Novi Governor Special. The front-drive one-ton race car was powered by two 4-cylinder Offys, with a common crankcase, also known as the Winfield V-8. Driver Ralph Hepburn made his fifteenth race, qualifying at 134.944 mph, shattering the previous record by nearly 4 mph. The car was named after Welch’s hometown of Novi, MI, which got its name because of its proximity to highway tollgate No VI.

found on http://www.taurtoisemotorsports.com/forties/Racin.html
at Tuesday, September 03, 2013