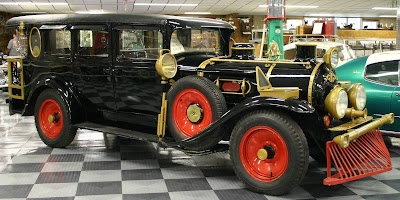 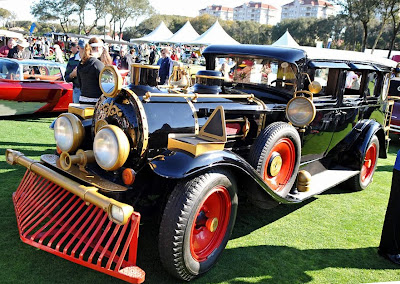 This 1929 Graham-Paige Sound Train began life as a limousine, and then was sent to the Indianapolis, IN Harry O. McGee Company for modifications. These modifications included a large public address system. The limousine interior was left pretty much unchanged, but the front-end sheet metal around the hood area was rounded to give the appearance of being the boiler of a locomotive. A large headlight was mounted up front along with a smoke stack, bell, steam dome, and whistle. The chrome-plated bell had a wire running inside to the instrument panel so the driver could attract even more attention to the vehicle.

These vehicles were built in the late 1920s and 1930s for the parent company of Paramount Pictures. They were used for all kinds of publicity situations: to advertise the opening of a new movie in a town or to deliver a star to an opening in grand style with dancing girls riding on the seats located on the fenders.
For my previous post, with 3 different photos of the variety of the Sound Trains: http://justacarguy.blogspot.com/2008/12/1929-graham-paige-sound-train-and-mgm.html
For the only thing I've came across about the Trackless Train: http://www.lincoln-highway-museum.org/TT/AA-TT-150.pdf
For a gallery of the San Diego sound train Graham Paige that I just photographed in Sept 2010 http://justacarguy.blogspot.com/2010/09/san-diego-1929-graham-paige-sound-train.html
at Monday, June 28, 2010