Bikes, aren't they the wrong way to see the country by rail? 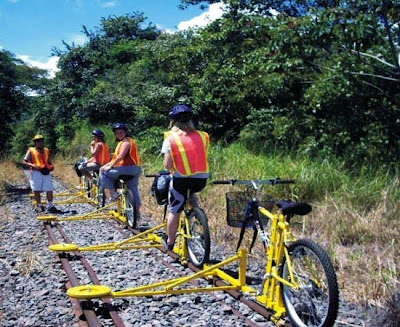 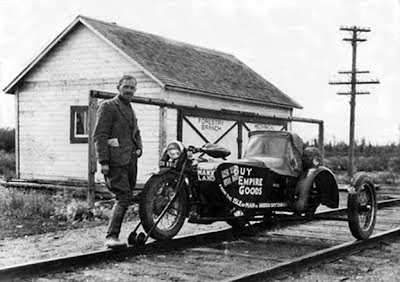 J. Graham Oates, the subject of the charming paperback 'Aurora to Ariel'
This was the first journey across the country by a vehicle with 'rubber tires', and as roads simply didn't exist for a thousand miles within the Canadian interior, railway lines were simply the only option available.
In 1928 Oates suggested that Castrol Oil sponsor him on an across Canada ride on an Ariel 500 cc motorcycle and sidecar. The trip had never before been achieved on a rubber tired vehicle. Oates began the trip at Halifax in July 1928 and soon realized that roads did not exist for many sections of the country and was forced to ride 800 miles between the railway lines. After 21 days of adventure, Oates arrived in Vancouver.
During the next three years, Oates remained in Canada and created a thriving motorcycle and boat dealership. In 1932, he returned to Britain and with the assistance of the editor of the Weekly Times, Oates planned his longest and most spectacular trip throughout England and Canada, this time to promote the sale of Empire Goods.
He was the first person to reach Hudson Bay on a rubber tired vehicle. There was still a lack of roads across the centre of Canada, but this time Oates was better prepared for rail travel. A small pair of flanged wheels were attached to the front and rear of the machine and the sidecar wheel axel extended outward to fit the gauge of the rails, making it possible to ride on the rails.
http://thevintagent.blogspot.com/2009/11/oates-and-ariel.html
For more rail cars: http://justacarguy.blogspot.com/2009/11/inspection-cars-for-railroad-inspectors.html
at Wednesday, December 09, 2009